For other uses, see Plantern (disambiguation).

Planterns light up an area, letting you see through fog.

Lets you see through fog

After beating Level 4-1
Plantern defies science. He just does. Other plants eat light and excrete oxygen; Plantern eats darkness and excretes light. Plantern's cagey about how he does it. "I'm not gonna say 'sorcery,' I wouldn't use the term 'dark forces,' I just... I think I've said enough."
Plantern is an unlockable plant in Plants vs. Zombies as an environment modifier whose purpose is to clear fog which obscures the player's vision.

For more information about this character, see Plantern

Plantern is obtained in the Fog area, specifically after beating the first level, and will illuminate and disperse a large area of fog (5x7), allowing the player to see approaching zombies and their own defense within the cleared radius. He can be planted anywhere, but is only used for his real purpose in the Fog and Vasebreaker levels. Technically, like the Grave Buster, the Plantern is not actually a Night plant. Because he is not a mushroom, he does not need to be planted in the Mushroom Garden to grow.

In Plants vs. Zombies

The only purpose of Plantern is to illuminate areas of Fog in the fog levels and It's Raining Seeds. Plant him within the foggy area on the right side of the screen to reveal the enemy. If Planterns are planted one square into the foggy area in the rows on either side of the Pool, all of the fog will disappear aside from some scraps of it in the corners of the screen.

In Vasebreaker, he is used to reveal what the vases contain within a 3x3 range.

He is a more easy-to-use and a more sun-saving alternative than the Blover. The latter however can be used in a harder but more practical way.

It is a good idea to put Planterns behind defensive plants such as Wall-nuts or Garlic, or inside a Pumpkin, to prevent them from being eaten if you can. The player should plant only two Planterns in a level, place him near the pool on the fourth row to the right side of the lawn.

The Plantern will reveal the contents of any surrounding vases - up to eight at most. In an emergency, a Plantern may be used as a weak blockade to briefly delay zombies while attempting to kill them with other plants. Ideally, he should be placed in the middle of as many vases as possible. Try to break a vase in the middle of a 3x3 square and then plant a Plantern there.

In the mini-game It's Raining Seeds there is fog, so use Planterns the same way that you do in the Adventure Mode levels. However, it depends on luck whether the player will receive the seed packet or not, as they are some of the rarest plants to obtain in the mini-game.

In Survival: Fog and Survival: Fog (Hard), use Planterns in the usual way. It is recommended that they are planted during the first two flags (before you get to choose new seed packets). Alternatively, for the Survival Mode levels, you can use Blovers instead, which also gets rid of Balloon Zombies and makes room for more plants, although there is the loss of sun every time you use Blover. Torchwood is also a viable replacement for Planterns, as he doubles the firepower of all peashooting plants in addition to clearing fog, but it clears a much smaller area of fog than a Plantern. It is suggested to use a Pumpkin around your Plantern to prevent zombies from eating him easily. Also, Garlic can be placed in front of the Plantern to divert zombies from eating your Plantern easily, while reinforced with Spikerock in front of the Garlic for increased damage.

Plantern seed packet in the iOS and Android versions 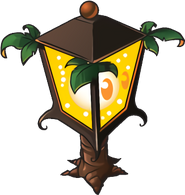 Plantern in the DS version

A left-facing Plantern in Zen Garden

A Plantern in the iPad version

A lawn full of Planterns

A medium-sized Plantern in Zen Garden

A small Plantern in Zen Garden

Retrieved from "https://plantsvszombies.fandom.com/wiki/Plantern_(PvZ)?oldid=2289766"
Community content is available under CC-BY-SA unless otherwise noted.