I need my TIME MACHINE!
Plant upgrade system (Chinese version) is a conjectural name for this article.
If you know the official name or have a better name or
translation for it, please contact a wiki administrator to change it.

Plant upgrade system is a mechanic in the Chinese version of Plants vs. Zombies 2. Plants are able to be upgraded via Puzzle Pieces and money to become stronger, as well as to gain unique effects. The requirement also increases when that plant is upgraded each time. Upgrading plants to Level 5 requires Culture Medium with the same rarity as the plant that needs to be upgraded.

Requirement of each level

Threepeater leveling with the upgrades given 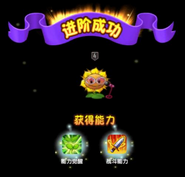 Sunflower Singer leveling up to Level 4 with the upgrades given 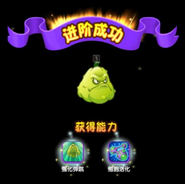 Squash leveling up to Level 3 with the upgrades given

Level 5 advertisement, showing all plants that have level now 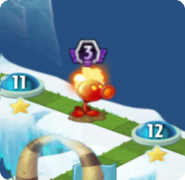 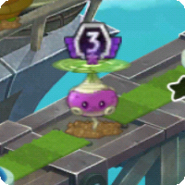 Retrieved from "https://plantsvszombies.fandom.com/wiki/Plant_upgrade_system_(Chinese_version)?oldid=2368871"
Community content is available under CC-BY-SA unless otherwise noted.