then does a Bonus Attack.
The most important meal of the day.
Plant Food is a premium rare plant trick card in Plants vs. Zombies Heroes and a member of the

to play, and its ability gives a selected plant +1

, then makes it do a bonus attack. Its closest zombie counterpart is Lurch for Lunch.

It is based on the game mechanic in Plants vs. Zombies 2 with the same name and appearance.

The most important meal of the day.

While this trick only gives a small stat boost for its sun cost, the fact that it can make a plant do a bonus attack makes it more powerful. Using it with Re-Peat Moss can make it do two bonus attacks, which can be devastating if its strength is high.

Party Thyme is also a useful plant to use with this trick, as you draw an extra card. As Chompzilla, playing it on Venus Flytrap or any plant in Venus Flytraplanet can allow it to attack once more in order to heal her again.

While mostly ignored, the added stat boost is very considerable at times. Using it correctly allows certain plants to make quick work of zombies with the

Armored trait, or maybe let your plant take one more hit from a certain zombie.

This can be used more effectively on plants with attacking traits:

There is not much that you are able to do. In retaliation, bouncing the boosted plant can work. Using

Deadly zombies as well can eliminate the threat.

However, the bonus attack is the unavoidable part unless the selected plant is targeting a Gravestone or shielded zombie. Additionally, playing Defensive End can increase its cost, which makes it less cost-effective.

The best counter, however, is Bonus Track Buckethead, as his ability negates the bonus attack of this trick, turning it into a weak boost for a high price. Gargantuar Mime is also a perfect solution, only when it is used on a plant that is not in the mime tribe with the exception of Imitater.

However, if none of those options are available, the only ways to prevent damage to your hero is to either time your block meter so that you get a guaranteed block, or to have a zombie tanky enough to stand two attacks. Also, avoid using all your cards and having nothing to block the plants' attacks, especially those that can lead to your defeat. 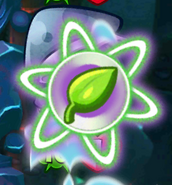 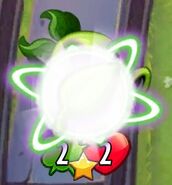 Plant Food on the advertisement for the Grass Knuckles Ally Pack 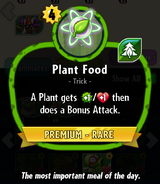 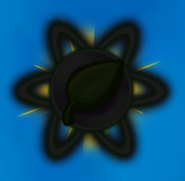 The player receiving Plant Food from a Premium Pack

The player receiving Plant Food from a Premium Pack

Plant Food on the advertisement for the Grass Knuckles Ally Pack