If your Hero would get hurt, this gets hurt instead.
He's still not sure if he should defend Pluto or not.
Planetary Gladiator is a galactic super-rare zombie card in Plants vs. Zombies Heroes and a member of the

Armored 1 trait, and his ability redirects all damage that is supposed to go to the zombie hero to him. This ability persists until all Planetary Gladiators are removed from the field. His closest plant counterpart is Soul Patch.

He is based on a gladiator, an armed combatant who entertained audiences in the Roman Republic and Roman Empire in violent confrontations with other gladiators, wild animals, and condemned criminals.

His description is a reference to a decision by the International Astronomical Union to drop Pluto from the planetary ranks.

He's still not sure if he should defend Pluto or not.

Planetary Gladiator is an excellent zombie to have early in the game, especially for his great value for 1 brain. You can play him on the first turn, and you are almost always guaranteed to live through the turn unscathed. Even a small health boost allows him to survive all the damage from Power Pummel at 3 ground lanes. While not as efficient as he is early-game, he still has value late-game, as he is cheap and can absorb a hit or two before being destroyed.

If you are playing as Rustbolt or Z-Mech and get lucky, you will be able to play Rock Wall on the following turn, increasing his health even further and making him more of a nuisance to your opponent. The Smash can boost him with things such as Vitamin Z. This lets him hit harder and possibly overwhelm your opponent so that he is virtually indestructible to fighters.

Additionally, he is a sports zombie, so you can boost him with Team Mascot so that he lasts longer, and protect him with Zombie Coach so that neither he nor you can take damage for a turn, very similar to Uncrackable. Escape through Time is another card that works well with him, being able to shield him like Zombie Coach can. Zombot Battlecruiser 5000 is also another option, although it is much more expensive.

For professional synergy, he synergizes well with both Jurassic Fossilhead and Zombie Middle Manager. Planetary Gladiator can be played on turn 1 to Evolve Jurassic Fossilhead on turn 2. While there are also Zombie Middle Manager and Zombology Teacher in the list of 1-brain professional zombies, Planetary Gladiator is the safest option out of the three due to his high health and the

Armored 1 trait. Barring Jurassic Fossilhead, Zombie Middle Manager will boost himself every time a plant tries to hurt you due to Planetary Gladiator's ability.

If your opponent plays this on the first turn, it will take you a bit to get rid of him due to his 3 health and

Armored 1 trait. You are not going to be able to destroy him unless you use a superpower that allows you to take him out. In fact, the only superpowers that can destroy him on turn 1 are Power Pummel, Precision Blast, Devour, and Tater Toss.

Fortunately, he only has 1 strength, so he will not bother you much offensively, and can also be easily destroyed by Whack-a-Zombie, Chomper, and Toadstool, although it may be better to save them for more dangerous zombies.

Haunted Pumpking can also destroy Planetary Gladiator if he is unboosted, but bear in mind that it will give your opponent a card advantage. Also, your opponent can play a strength-boosting card to put you in a dilemma if they are The Smash or Z-Mech, or use Team Mascot frequently. In such a case, Bounce him to make him unable to protect your opponent and remove the boost.

You can also make play stat-degrading cards like Water Balloons or Weed Whack to not only reduce his health, rendering him more vulnerable to weaker attacks, but also remove his strength completely, preventing him from even fighting back.

If your opponent plays this on the first turn, avoid playing More Spore as it will be completely useless due to the

Armored 1 trait. However, playing it can still be a good idea if you are planning on using Buff-Shroom the next turn to increase the Button Mushrooms' stats.

Using the Strikethrough trait against this zombie may also be useful provided the plant with the trait has at least 2 strength, as the Planetary Gladiator will take damage twice (once from hitting him directly, another time from hitting the zombie hero as a result of the Strikethrough trait). If the plant is able to be buffed to 3 or more strength, one attack will kill this zombie. 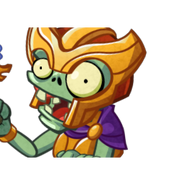 A small Planetary Gladiator due to a glitch 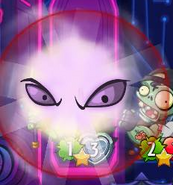 Possessed being played on Planetary Gladiator 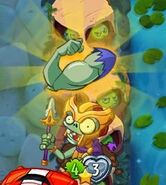 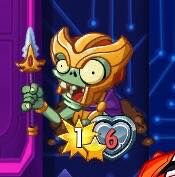 Planetary Gladiator with the

Planetary Gladiator with a star icon on his health

Planetary Gladiator on the background of the Galactic Gardens battlefield