Pizza Delivery Zombie loves prank calls. His best one is ordering 3 saucy cheese pizzas to a house that's covered with aggressive plants. The problem is that he falls for it every time.

Pizza Guy is a Fast Food zombie introduced in Plants vs. Zombies 3. He can throw pizza at plants in his lane, disabling them until the pizza is destroyed. However, he only throws three pizzas maximum, and destroying a pizza box will reduce the number of pizzas he will throw. When he is all out of pizzas, he will act like a Browncoat Zombie.

He's based on a pizza delivery man, a person who delivers pizzas that someone has ordered.

Pizza Guy is a significant threat, having the ability to disable a plant until the pizza covering it is destroyed. Additionally, he cannot be defeated in a single hit due to being a Layered zombie, making high damage plants less effective against him.

Destroying his pizza boxes early will make him throw less pizzas. When he runs out of pizzas, he is fairly easy to defeat, acting as a Browncoat Zombie with the Hot damage type. When his thrown pizzas start to cover multiple plants, using area of effect and Breaker plants such as Pine Needler and Blockbuster can help clear out the obstacles. Ragweed is a notable example, covering 3 tiles in front of itself while consistently pushing zombies away; 2 or 3 columns of Ragweeds can help safeguard against multiple Pizza Guys. Ragweed's Chilling damage type also allows it to destroy the pizzas faster. 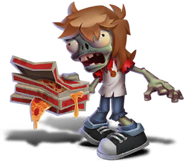