Pitchfork Zombie never stops line dancing. Step toward a house with her left foot, then her other left foot, pitch a plant, do si do, forget what you were doin'—oh yeah, brainz—and that's what it's all about!

Pitchfork Zombie is a Farm Zombie in Plants vs. Zombies 3, who you first encounter at Floor 14 of Devour Tower. She uses her pitchfork to toss plants over her shoulder, simmilarly to the Excavator Zombie from Plants vs. Zombies 2.

Unlike Excavator Zombie, she doesn't use her pitchfork to protect herself from plant attacks coming from the front, and she will not target groundcover plants, like Spikeweed.

She resembles on one of the farmer zombies scrapped concepts from Plants vs. Zombies 2, who was originally going to have the same ability (confirmed in a presentation about the game's early development).

The ability to hold plants and toss them over her shoulders comes from the common use of pitchforks to move hay and other similar materials around. Her ablity is the same as Excavator Zombie's from Plants vs. Zombies 2.

Pitchfork Zombie is faster than the average zombie, and her ability to toss plants 2 tiles behind her can make plants with low health in a very vulnerable spot. It is recommended to use Groundcover plants to damage her without the risk of getting tossed, as well as plants that can stun or slow her down, like Buttercup. While she can still toss her around, Buttercup will stun Pitchfork Zombie first, giving you some extra seconds to finish her off before she moves Buttercup. 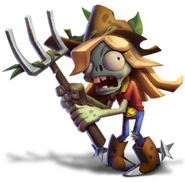