Plants vs. Zombies Wiki
Register
Don't have an account?
Sign In
Advertisement
in: China exclusive, Archived, Zombies,
and 6 more

Pirate Seas
Pistol Zombie was a zombie in Plants vs. Zombies Online that was introduced in Pirate Seas. They occasionally shot at plants with their pistols, dealing small damage to them. This zombie could be very dangerous in large numbers, as the amount of bullets shot at plants could be overwhelming.

Pistol Zombie is based on pirates holding a flintlock pistol. 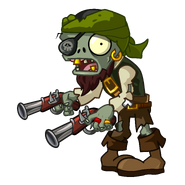 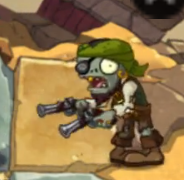 A Pistol Zombie in Ancient Egypt (Endless mode only)

A Pistol Zombie losing his arm