Survive the zombie attack with the given plants
Pirate Seas - Day 18 is the 18th level of Pirate Seas in Plants vs. Zombies 2. It is a Locked and Loaded level. When this level is finished for the first time, the player unlocks the Spikerock.

As there are no sun producers at the player's disposal, there is much less sun produced in this level. Additionally, Buckethead Pirates and Imp Cannons appear. The player can lose many lawn mowers if the defenses are not set up strategically or on time.

The plants given are not too useful. Peashooter is cheap but doesn't have much firepower, while Repeater with a moderate damage is quite hard to plant in this level. And with only the falling sun to use sun, it is difficult to set up a good offense and maintain a good defense. Wall-nut is good for blocking namely Swashbuckler Zombies and Imp Pirate Zombies, but they will be eaten quickly later in the level. Spikeweed can help damage zombies. Iceberg Lettuce should be used early on to get some sun, as well as using Plant Food on it to give some time for the offensive plants to attack. Finally, Spring Bean is by far the most important plant to use, due to its Plant Food ability.

The player must also utilize Plant Food carefully, as it is vital to killing zombies on the lower planks. The zombie hordes later on come in large numbers later in the level, which can be hard to deal with, especially with the plants given in the level.

Repeat for the row above.

Then place 1 Spikeweed on the 2nd column of each row above that.

Then place a Wall-nut in the 1st column of those rows (you have to have Spikeweeds placed first to kill the Swashbuckler Zombies who arrive right around this time).

Then just add Spikeweed to all other columns of the bottom 2 rows. Alternatively, for the top 3 rows, you can defend them with no Wall-nut, as long as you have 2 Spikeweeds in each row in any of the first 3 columns (usually just one Spikeweed is enough for each row, but it is safer to put two, since, at level 3, Spikeweed may occasionally not have enough time to kill an imp if one walks over it).

Wave of zombies on a high Dynamic Difficulty 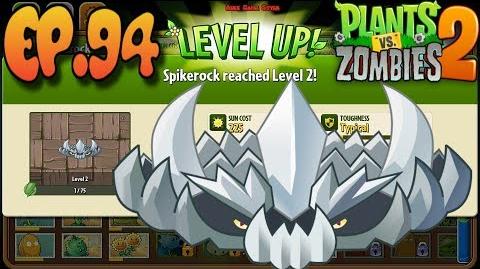 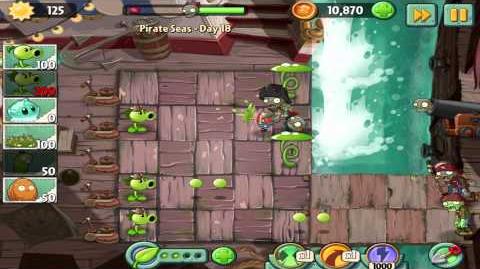 Retrieved from "https://plantsvszombies.fandom.com/wiki/Pirate_Seas_-_Day_18?oldid=2356308"
Community content is available under CC-BY-SA unless otherwise noted.