For the international version of this level, see Pirate Seas - Day 16.

Pirate Seas - Day 16 is the 16th level of Pirate Seas in the Chinese version of Plants vs. Zombies 2. It is a Last Stand level. To complete this level, the player has 2000 sun to spend on a strategy to defeat the zombies. When this level is finished for the first time, the player gets coins.

In the Normal Mode of this level, the player has to beat 9 kinds of zombies in Level 1.

With only 2000 sun to spend, the player does not have many options. Many Seagull Zombies appear, as well as some Barrel Roller Zombies. This makes the player choose different types of offensive plants, which could take a big toll on their remaining sun cost they can use. The biggest threat are the Swashbuckler Zombies, which act like shields for the tougher zombies. Kernel-pult is highly suggested, as it can stun all zombies with its Plant Food and easily deal with the Seagull Zombies.

This simple strategy can beat the level without Plant Food, premium content or losing any mowers. It does not require any plants that needs the player to progress past this level.

The rest are not needed.

This strategy shows off the raw power of Snapdragons. They will kill most everything themselves, with the center group not even needing any Wall-nuts. This includes the Zombie Parrots, which will almost always try to take them and be burned down quickly. It is possible for them get lucky and steal a Wall-nut while the Snapdragons are in between attack and idle modes, but those can easily be replaced with the leftover sun. Seagull Zombies and stray Imp Pirate Zombies may get a few bites on the Wall-nuts, but not nearly enough and your original Wall-nuts, if they are not stolen, will end the battle barely degraded. The Bloomerangs will damage the Barrel Roller Zombies enough for the Snapdragons to kill them before they can roll barrels into them and the Snapdragons will kill the center lane Imp Pirate Zombies almost always before they can do any damage at all. If you use the Plant Food on the Snapdragons, the zombie force will have zero chance of survival. 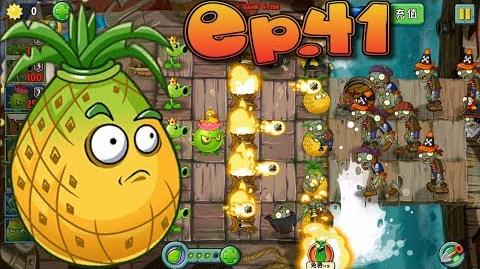 In the Hard Mode of this level, the player has to beat the zombies above in Level 2.

With only 2000 sun to spend, the player is forced to use strong plants to beat the Level 2 zombies.