There are no special zombies except for the Swashbuckler Zombie and the Imp Cannon. However, they can prove quite a nuisance if the player does not pay attention, as they can easily cause objective failure and as a result, loss of a level. Straight-shooting plants will help dealing with the Imp Cannons, while area-of-effect plants will help deal with the Swashbucklers. The player should use both types in conjunction for this level. In addition, the flowers are located 1 tile away from where Imp Pirate Zombies and Swashbuckler Zombies landing position, so defensive plants should be placed to the right of the flowers. Imp Cannons should be dealt with quickly, or the player could risk losing because of the Imp Cannon exploding might bring Imp Pirate Zombies close to the flowers. Finally, the player should still worry about the other zombies that appear, as Buckethead Pirates can easily slip through defenses.

This strategy works without any plants from later worlds or bonus seed slots. Additionally, this does not require any Power Ups or Boosted Plants.

You can use this strategy if you are flowing through the game by world order. Here's the plants needed.

Step 2: While doing this, kill the first three or four zombies with Potato Mine, and also stall them with Iceberg Lettuce.

Step 3: Get Wall-nuts on the plankless rows, those flowers will not protect themselves!

Step 4: Once the third/fourth zombie comes out, it is thy... wait you have not gotten to that world yet... anyway, it is time to bust out Snapdragon. Place them on the fourth column, then the third.

Step 5: While placing Snapdragons, once an Imp Cannon appears in a lane, quickly dig a Sunflower and use a Coconut Cannon. Make sure you kill the Imp first, because you may waste a shot or two!

Step 6: Then use Coconut Cannons against the rows with planks. It will whittle down the horde, especially those Bucketheads.

Step 7: Use Plant Food and replant Wall-nuts if needed. If you cannot get the Coconut Cannon to hit the Imp Cannon in the back, use Plant Food. If Bucketheads are swarming and overwhelming you (which they probably will not if you plan accordingly), use Snapdragon's Plant Food effect.

In the end, your setup should look like this:

This game was itching for me to use Sap-fling, so I used RNG to get this level. By EpicGamer23468 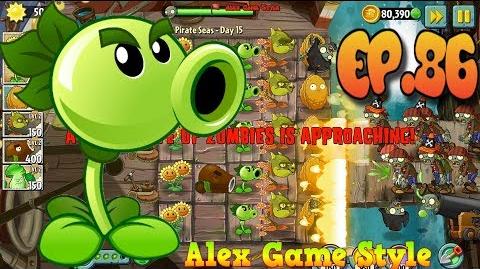 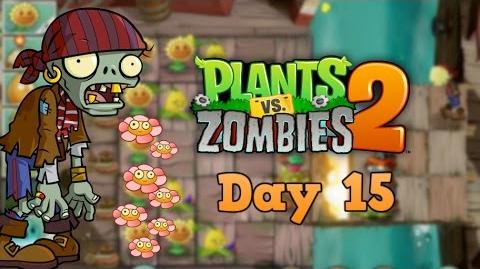 Retrieved from "https://plantsvszombies.fandom.com/wiki/Pirate_Seas_-_Day_15?oldid=2356032"
Community content is available under CC-BY-SA unless otherwise noted.