The gimmick of this world are the planks that appear on several lanes each level. These planks prevent the player from planting on some spaces, which limits the player's strategies. In addition, the planks don't allow ground plants like Potato Mine to be planted on. Newly seen Swashbuckler Zombies sweep halfway through the lawn over the planks or where they should be. The layout of the world forces the player to take a different approach at defeating the zombies.

The player cannot plant a Potato Mine on the planks. They can only do so with other plants. The player should plant two columns of Sunflowers at the back, a column of Snow Peas or Repeaters, a column of Bonk Choys, and then a column of Wall-nuts (especially the lane which Swashbuckler Zombies appear).

Plant an Iceberg Lettuce once the first zombie appears. Gather enough sun for another one. Plant it in the first column. Once you have two of them, plant a Potato Mine. Keep planting twins throughout. When the first Swashbuckler comes, put a Wall-nut on the plankless lane that it is on. Then, plant a Peashooter. Once you have a Peashooter in all lanes, you can upgrade to Repeaters. Make sure a Wall-nut is in all lanes. If they are eaten, replant them. Wait for the peas to finish them off. Just like all first levels, you should win with all lawn mowers. 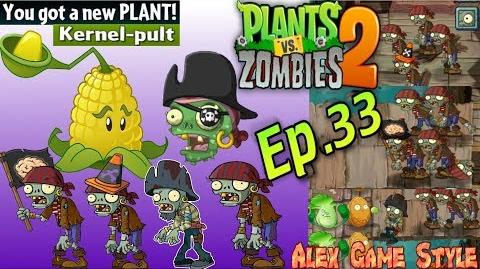 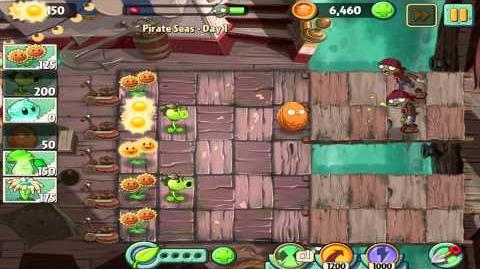 Retrieved from "https://plantsvszombies.fandom.com/wiki/Pirate_Seas_-_Day_1?oldid=2356977"
Community content is available under CC-BY-SA unless otherwise noted.