Pirate Seas (海盗港湾; pinyin: Hǎidào Gǎngwān; translation: Pirate Harbor) is the 2nd world in the Chinese version of Plants vs. Zombies 2. It is based on an old pirate ship on the open ocean. It is home to pirate zombies. It can be unlocked with a select number of stars or 58 gems.

In this world, the player's lawn is split up into three sections. The first section, the half towards their lawnmowers functions as it normally would. The section towards the entry point for zombies is quite different. Planks connecting the zombies ship to the player's allow them to passage onto their lawn. While some rows do not have any planks, they can still be attacked by ambush zombies landing halfway across their lawn. The sections with the planks will function as normally, with the exception that a few plants cannot be planted on planks (such as the instant use plant: Potato Mine). The third and final part is the sea tiles, which no plants (not even water-orientated plants) like Lily Pads can be planted there. This is also the main part of the lawn where Swashbuckler Zombies start to swing forward towards the non-water parts of the lawn.

The events in Pirate Seas takes place in the Golden Age of Piracy, assuming to be in the period of buccaneering which was characterized by an Anglo-French seamen based on Jamaica and Tortuga where in the assault of Spanish colonies. Judging by its description, it is assumed that this world takes place on the Caribbean Sea, which is the most well known for the main setting of countless literary efforts related to piracy and swashbuckling.

The year is 1679, the golden age of zombie piracy! Keep your booty close, and your plants closer, as the zombies take to the sea to plunder your brains!

*Prizes other than coins, stars and chest.

Cannons Away is an exclusive mini-game for Pirate Seas. The objective for this game is to beat the target score by shooting the Seagull Zombies using the Coconut Cannon. Failure to do so will force the player to restart the level.

In this Brain Buster, the player is required to finish the level with the plants given to survive the zombies attack.

In this Brain Buster, the player has to protect the endangered Spring Beans and survive a horde of zombies at the same time. Otherwise, the player will have to start over again.

The player must plan their defenses carefully and must survive an intense zombie incursion. There are no zombies carrying Plant Food therefore the player must use the Plant Foods provided to them carefully or they will fail the level. However, if the player is smart enough to formulate a good strategy, they can win this Brain Buster without spending even a single Plant Food.

Pirate Seas on the World Map 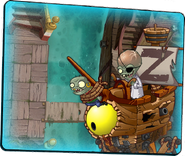 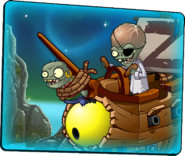 Screenshot of a Pirate Seas level 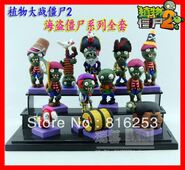 An ad for the new map style featuring Pirate Seas (note that it is called "PirateWorld", and it has some plants that do not belong to it in real gameplay) 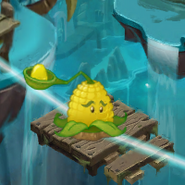 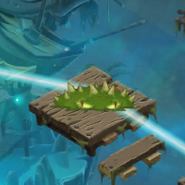 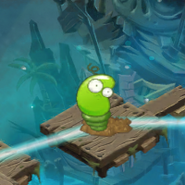