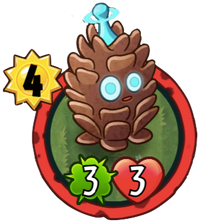 When played: Transform all Plants into 3

Pineclones.
It's nothing personal; she just prefers the company of other Pineclones.
Pineclone is a premium legendary plant card in Plants vs. Zombies Heroes and a member of the

. She does not have any traits, and her ability turns all plants on the field into Pineclones when she is played. Plants with the Amphibious or Team-Up trait stay in their positions even after they are transformed.

She is based on the conifer cone, commonly known as the pine cone.

Her name is a portmanteau of "pine cone," the real-life plant she is based on, and "clone," referring to her ability to clone itself (compare snowclone).

It's nothing personal; she just prefers the company of other Pineclones.

as this just weakens your plants. This means that you should avoid playing this when you have important plants on the field, such as Soul Patch and Cornucopia, unless you need to protect them from instant-kills. A good moment to play her is when there are a lot of weaker plants on the field, making the weaker plants stronger. For example, if you have multiple early-game plants with low stats, you can play this plant to make all of them stronger and overwhelm your opponent.

Another good strategy is using plants with Team-Up before playing Pineclone, as this will allow you to have even more Pineclones on the field than normally possible. Shroom for Two, Poppin' Poppies, and More Spore are good choices as they make multiple plants, which will increase the number of Pineclones made. You can try spamming cheap Team-Up plants like Shellery or Sweet Potato as well. Playing Amphibious plants such as Admiral Navy Bean also helps greatly, as they will also be transformed when Pineclone is played.

Never play this when Supernova Gargantuar is on the field, as once a Gargantuar destroys one Pineclone, all Pineclones will be destroyed.

Countering this is not easy. When there are only a few Pineclones, most zombies should be able to destroy them. But if you have to deal with groups of them, you may struggle a lot. The best counter is Chum Champion's Evolution ability if you can manage it, as he can destroy all unboosted Pineclones at once. Otherwise, use a combination of damaging and stat-degrading cards to wipe them out. Extinction Event is incredibly useful, as it will severely weaken all of your opponent's Pineclones. Supernova Gargantuar also works well as he destroys all other Pineclones if one of them is destroyed. To extend his usefulness, you can use Teleport or Teleportation Zombie to safely play him without fear of him being destroyed, but this combo is normally only possible with Immorticia.

If your opponent seems to be focusing on this card, they will very likely to rush you off with weak plants before the final push with Pineclones. Do not Bounce this plant unless it ensures your victory or saves you from defeat, as this will allow the use of Pineclone once again, possibly causing more plants to be transformed into Pineclones. However, do note that it can be a viable option to play Zombot Stomp when there are many Pineclones on the ground as doing so will fill your opponent's hand up with Pineclones that cannot activate their ability due to there only being Pineclones on the field. This is especially useful in the case of your opponent using a mill deck as it will not be easy to play all the Pineclones as they cost 4 each.

Retrieved from "https://plantsvszombies.fandom.com/wiki/Pineclone?oldid=2308022"
Community content is available under CC-BY-SA unless otherwise noted.