Plants vs. Zombies Wiki
Register
Don't have an account?
Sign In
Advertisement
in: China exclusive, Archived, Plants,
and 6 more

Deals heavy damage to the last zombie in a row.

Beating Pirate Seas - Level 13-1
Attacks the zombie that's the farthest back in its row.
Pineapple Cannon (菠萝投手; pinyin: bōluó tóushǒu) was a plant in Plants vs. Zombies Online introduced in this games version of Pirate Seas.

It attacked in a manner similar to Carrot Rocket, shooting pineapple rockets at the last zombie in its lane, and each pineapple did 80 damage per shot to a zombie.

Pineapple Cannon was based on the fruit of the pineapple (Ananas comosus), a tropical plant with edible multiple fruit.

When given Plant Food, Pineapple Cannon launched 5 pineapples at random zombies on the screen.

The Pineapple Cannon, though not being a very useful plant by itself, could be used the same way as the Carrot Rocket, as it relatively did about the same damage. Its main difference lies in its different Plant Food ability. It was not recommended to use by itself, due to its sun cost, recharge, and slow fire rate (with it being the same as Carrot Rocket's). A good way to use this plant would have been in tandem with Laser Bean for picking off enemies from the back. 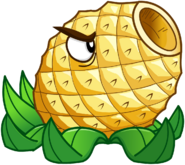