Plants vs. Zombies Wiki
Register
Don't have an account?
Sign In
Advertisement
in: China exclusive, Articles with conjectural titles, Archived,
and 10 more

I need my TIME MACHINE!
Pig Squash is a conjectural name for this article.
If you know the official name or have a better name or
translation for it, please contact a wiki administrator to change it.

20 stars
Pig Squash (倭瓜八戒; pinyin: wōguā bājiè) was a plant in Plants vs. Zombies: Journey to the West. It is one of the Heroes. It attacks by squashing the zombie close to it.

Pig Squash is based on a Squash and Zhu Bajie, "Pigsy" in English, from Journey to the West, a half human-half pig monster who often gets himself and his companions into trouble through his laziness, gluttony, and propensity for lusting after pretty women.

Pig Squash is largely a close-ranged attacking plant. Its main attack, squashing zombies, is the exact same as that of Squash, except that it survives squashing but has to recharge after doing so. Exact strategies used with Squash can be applied here, such as grouping zombies together, but simply remember that Pig Squash can be moved onto any tile without any external assistance.

In levels with large amounts of zombies, Pig Squash can function as a money-farm, provided that "Money-thirst" is unlocked. Keep in mind that the higher-levelled the skill, the more coins are produced.

However, Pig Squash is lackluster in destroying powerful zombies, crowd-control, or ranged attacking. Its main weakness is further emphasized by the fact that it moves while squashing, leaving it vulnerable to Gargantuars. In levels with high zombie density, it may be a better idea to bring other Heroes. 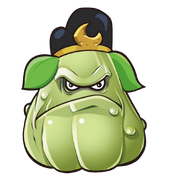 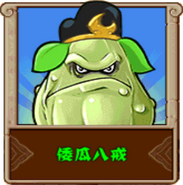 Icon in the Hero selection menu 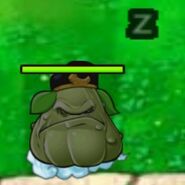