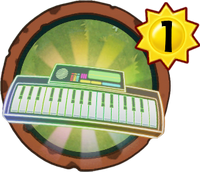 .
Conjure a Galactic Gardens card.
"The galaxy is one beautiful melody, so play!"
Photosynthesizer is a galactic uncommon plant trick card in Plants vs. Zombies Heroes and a member of the

to play, and its ability gives a selected plant +2

and Conjures a card from the Galactic Gardens set, including another Photosynthesizer.

It is based on a synthesizer, an electronic musical instrument that generates electric signals that are converted to sound though instrument amplifiers and loudspeakers.

Its name is a portmanteau of "photosynthesis," the process of which plants gain nutrition from sunlight, implying that it is a plant card, and "synthesizer," the real-life instrument it is based on.

Its description may be a reference to a quote by the 40th president of the United States, Ronald Reagan, specifically, "Life is one grand, sweet song, so start the music."

The galaxy is one beautiful melody, so play!

Photosynthesizer is a highly efficient card for its cheap cost, being able to give a plant a decent health boost, as well as Conjuring a galactic card, which could range from cards such as Cosmoss to more powerful ones like Astro Vera. If you want to focus on the health boost, you can play it on plants that need a little extra health to survive an attack that might otherwise destroy it. Alternatively, you could play it on Health-Nut or any other plants under Pecanolith's ability as a boost in both strength and health. Its other ability can be useful for Conjuring a galactic card for you to play and can be vital for Guardian heroes who lack easy ways to gain more cards, such as Spudow or Wall-Knight. Grass Knuckles can also have Captain Cucumber on the field to make the Conjured card cost less. It can also cheaply trigger Dino-Roar effects, too.

The only issue for this card is that it can only be played if there is a plant on the field. This means that you have to manage your plants so that at least one survives with enough health for you to feel like you aren't wasting this card.

to a plant for a 1-sun card is already pretty annoying, but Photosynthesizer's Conjuring ability should also be taken caution of.

Deadly cards such as Smelly Zombie and Barrel of Barrels can also destroy said plant even with the health boost.