Phat Beet has been known to drop sick rhymes, dope grooves, and highly satisfactory jams, often within seconds of each other.
Phat Beet is the first plant obtained in Neon Mixtape Tour in Plants vs. Zombies 2. It attacks zombies by sending out shockwaves every 1.5 seconds in a 3x3 area, each shockwave dealing 15 damage per shot.

From anywhere between its fourth and sixth attack, Phat Beet will deal a critical hit, which is worth 45 damage per shot.

Phat Beet's appearance is based on the beetroot, the taproot portion of the plant Beta vulgaris, simply known as the Beet in English.

This plant's name is a portmanteau of the expression "phat(excellent) beat" and "Beet," the type of real-life plant this plant is based on.

Phat Beet has been known to drop sick rhymes, dope grooves, and highly satisfactory jams, often within seconds of each other. 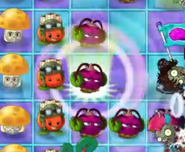 Its shock wave knocks back any zombies it doesn't kill.

Phat Beet shares its strengths and weaknesses with Gloom-shroom and Gloom Vine - namely, an extremely high damage potential hampered by a lack of range. It is very effective in the rightmost columns to keep the far end of the lawn tame.

Phat Beet is useful against the Imps thrown by Gargantuars, especially in Endless Zones in higher levels. It works well in numbers and against them, giving it utility. Sadly, Phat Beet is very vulnerable to the Gargantuars themselves, and players should be cautious when taking on Gargantuars with Phat Beet.

In Ancient Egypt and Dark Ages, Phat Beet can be useful for clearing out tombstones, if planted in the middle of a big group of them. In Wild West, Phat Beet is useful to put on minecarts. Combined with Sweet Potato, Phat Beet can cause great damage to the zombies, including Zombie Chickens or be placed at the back of the lawn to combat Prospector Zombies.

In Big Wave Beach, Phat Beet is useful against Octo Zombies, since a group of them can quickly kill his thrown octopus and free the trapped plant. In addition, Phat Beet is a good plant against low tides, especially if Magnet-shroom is used against Pompadour and Bikini Buckethead. Phat Beet's attacks can damage Snorkel Zombie, even when submerged. In Frostbite Caves, ice floes should be used to one's advantage to create an effective strategy with Phat Beet as long as there are no Weasel Hoarders or Dodo Rider Zombies. He cannot fully take down an Ice Weasel in one hit (unless it is leveled up or it is a critical hit).

Phat Beets can be used to quickly dispatch hordes of Ice Weasels, as they are area-of-effect plants and can kill multiple ones at once.

Both in normal levels and Endless Zone, Phat Beets work well with Winter Melon or Sap-fling because they can slow down the zombies as Phat Beet attacks. To increase the damage, Spikerock can be used.

Phat Beet's Plant Food effect should be used only in large waves near it or you will waste a Plant Food.

Phat Beet also has an immunity to Boombox Zombie's ability and should, therefore, be planted closer to the right side of the lawn for quick dispatchment. Also, keep in mind that the critical hits deal three times as much damage.

Phat Beet works great in combination with Homing Thistle in a checkered pattern and is effective in most worlds. The Homing Thistle can take out zombies from far range and Phat Beets will thump out damage from close range, covering all ranges. The only problem with this strategy is the fact that Homing Thistle will only shoot thistles to the zombie closest to your home so it's best to get Homing Thistle in large quantities for more efficiency.