Shots can be manually detonated to deal more damage

Rare
Not only does Petrified Cactus' strong exterior protect her in battle, it also doubles as a wildlife sanctuary for all manner of woodland creatures.
Petrified Cactus is a Rare variant of Cactus in Plants vs. Zombies: Garden Warfare 2. She was first revealed on the Twitter page in Christmas 2015 in a preview of Sandy Sands. She was later revealed in a live stream that the Petrified Cactus' special perk is if she tries to fire after a previous shot, the previous shot will explode, like Captain Cannon's Extend-o-Cannon and Electro Pea's Electro Cannon. Like the Jade Cactus, the Petrified Cactus sacrifices some of her speed for more health.

Not only does Petrified Cactus' strong exterior protect her in battle, it also doubles as a wildlife sanctuary for all manner of woodland creatures.

Hit the fire button while your shots are airborne to trigger an extra large explosion!

The Petrified Cactus' primary weapon is the Egg Blast. It is a single ad explosive shot that deals 30-45 impact and critical damage and 16-30 splash damage.

The Petrified Cactus is mainly useful for weakening and taking out groups of zombies or zombies that are hiding behind corners. However to do this successfully you need to explode her shots at the exact right time, which could be simple due to its slow projectile speed, however it is difficult to do as well. The Petrified Cactus should be used at mid-range as she can attack quickly but is not too close to her opponent. Try to also target groups of Zombies as her explosions can deal lots of damage to each of them, making her a force in modes like Herbal Assault. If a weakened Zombie hides behind a wall to avoid damage, a timed explosion just behind the wall can take them out.

Try to stay out of groups when the Petrified Cactus is trying to attack you because if she hits an ally near you, the blast radius damage can also do some big damage to you, too. It is also quite easy to dodge her attacks because of her slow projectile speed, however you must be wary of them. Try to also not hide when the Petrified Cactus is shooting at you, as she can explode her shot behind where you are hiding, still dealing damage to you.

One of Petrified Cactus' projectiles 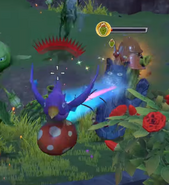 A Petrified Cactus in Flag of Power mode, shooting at the player