Throws a poisonous perfume bottle at plants so that plants can't attack and get hurt.

Perfume Zombie (﻿调香师僵尸; pinyin: Tiáoxiāngshī jiāngshī) is the first unique zombie to appear in Renaissance Age in the Chinese version of Plants vs. Zombies 2. She randomly throws perfume bottles at plants, releasing poisonous perfume that stuns plants and deals percentage-based damage to them in a 1×1 radius, that lasts 20 seconds. She also releases a poisonous perfume cloud in a 1×3 area around herself when she's defeated. Her perfume can be countered with Aloe.

If you see her in the level preview, always choose Aloe. Her perfume effect is severely devastating to the player. The player should also be careful when trying to stop her from progressing, as she can release a perfume in a 1x3 area when defeated. Else, you can also use plants like Chomper, which will instantly eliminate her and won't trigger the releasing of perfume when they defeat the Perfume Zombie 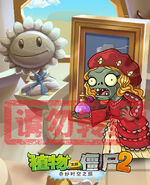 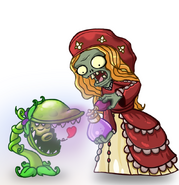 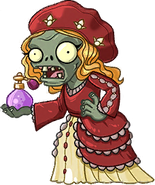 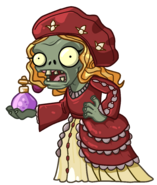 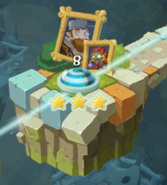 Retrieved from "https://plantsvszombies.fandom.com/wiki/Perfume_Zombie?oldid=2360300"
Community content is available under CC-BY-SA unless otherwise noted.