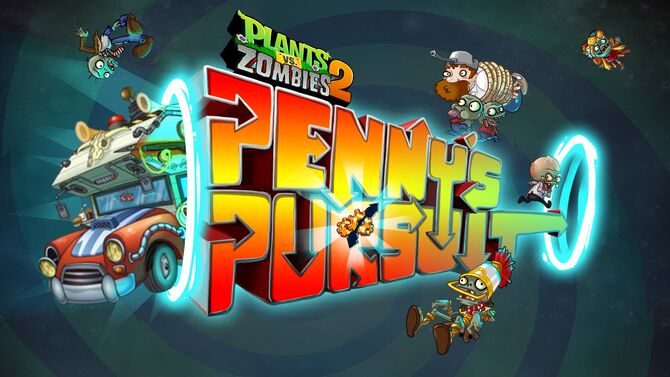 Penny's Pursuit is a game mode in Plants vs. Zombies 2, which was released alongside the 7.9.1 update. It is a game mode that appears between the Adventure Mode and Arena icons.

This mode requires the player to have Fuel to be able to play. Fuel can be bought with gems, or recharged overtime. Fuel usually is maxed at 15 but if you buy more then you can go over 15. The player can also choose to watch ads to gain more of it, it gives 5 fuel. It requires internet connection to play and at least 15 plants to unlock.

In Penny's Pursuit, there are 3 difficulties to choose from for a level: Mild (easy), Spicy (medium), and Extra Hot (hard). To start a level, the player needs at least 5 Fuel. Once loaded into a level at any difficulty, the player can select Perks to use in the level. The player can choose one Perk for free, but additional Perks will cost gems to use in the level (with 5 gems cost for each perk). Playing a level requires fuel at any difficulty.

Depending on the difficulty, the zombies available and the objectives the player can complete may change. In addition, harder difficulties can take away certain benefits and zombies have stronger health and faster eating rate than usual, the level of difficulty can also decrease the number of lawn mowers, number of seed slots, how often sun drops from the sky, how much sun you start off with in a level, the amount of Plant Food you start off with in a level, the maximum amount of sun you can bank up, and preperation time before the first wave starts. Once the player selects their level, difficulty, and Perks for the level, they're able to play levels that are in different styles: normal zombie attacks, Arena style levels, Last Stand levels, timed levels and mini-games. There are also bonus objectives which the player can complete to upgrade their Perks. Once a level is completed, the player can receive rewards and ZPS Points, which is used to fuel a meter to fight Dr. Zomboss and a specific Zombot, which will be hinted within the back of the map via a podium from the world.

When playing spicy and extra hot levels, there are chances that you will lose due to zombies health being increased and benefits being taken away. Don't try to do spicy and extra hot levels if you have low level plants or feeling that you can lose, doing it can result you in losing the level and as such also losing fuel. If you try to do these levels then try to use explosive plants such as Primal Potato Mine or Explode-O-Nut to easily deplete their health as well as clear crowds. Using these in mild levels can easily kill them, and using them in extra hot levels will only need 1 or 2 plants to kill the zombies.

Retrieved from "https://plantsvszombies.fandom.com/wiki/Penny%27s_Pursuit?oldid=2298160"
Community content is available under CC-BY-SA unless otherwise noted.