Not to be confused with the achievement with a similar name.

Penny is the name given to Crazy Dave's time machine. She always appears with Crazy Dave and teaches about the new Brain Busters and areas in the game along with Crazy Dave. She seems to be the opposite of Crazy Dave, always being very smart, serious and informative, although Crazy Dave used her to go back in time just because he wants to eat his taco again.

Penny is likely a parody of the DeLorean from the Back to the Future film trilogy since they are both cars that can travel through time.

She's most likely a 1950's car modified into an RV and customized with various hi-tech gadgets. Her tailfins closely resemble those of a 1959 Cadillac's, and there is a pair of fuzzy dice, which originated in the 1950's, hanging from the rear-view mirror.

When "talking," Penny makes various beeps and whirrs, similar to how Crazy Dave talks in random gibberish. On Ancient Egypt - Day 7, she reveals that she has Gügle Translate, a program that can translate any language. 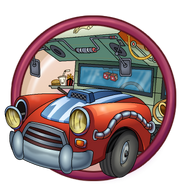 Penny's icon from the Plants vs. Zombies 2 fan kit 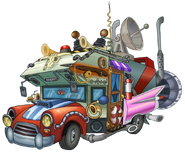 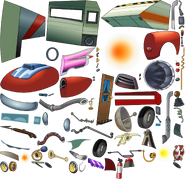 Penny on the Penny's Pursuit icon (Note: She uses her "beta" design)

Penny acting as the "house" on the Penny's Pursuit lawn

Penny in "Plants vs. Zombies vs. Jay and Silent Bob"

Crazy Dave and Penny in the tutorial

Penny explaining one of the Endless Zones in a pre-1.7 update 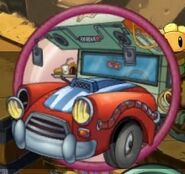 Penny in the map dialogue

Penny, along with Crazy Dave in Ancient Egypt 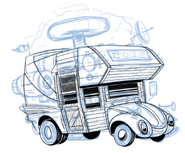 An advertisement for update 7.4.1 featuring Penny

Another HD Penny
Add a photo to this gallery 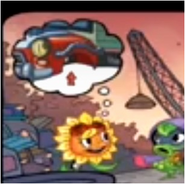 Penny next to the house in the old main menu

Penny made a cameo in the Rewind Bundle
Add a photo to this gallery
Plants vs. Zombies: Battle for Neighborville

Penny as seen in Plants vs. Zombies: Battle for Neighborville
Add a photo to this gallery