Pelican Zombie crosses water without a plank and flies over low plants.

Passes over low plants like Spikeweed and Iceberg lettuce

(can blow away zombie)

Pelican Zombie crosses water without a plank and flies over low plants.

The Pelican Zombie upgraded from the Seagull Zombie and has no regrets. No egrets, either. Just a pelican.

Pelican Zombie is an upgraded version of Seagull Zombie, which means the two have the same counters. You can defeat a Pelican Zombie the same way you would for a Seagull Zombie, using plants such as Blover or Kernel-pult. Be aware of Pelican Zombie's speed, as it can make it to your lawn mower or house rather quickly if you don't defeat it in time. You can block them off with defensive plants such as Wall-nut if you don't have Blover or Hurrikale available. Primal Peashooters and Apple Mortars are great choices for stalling this zombie. Snow Peas, Winter Melons, and Cold Snapdragons can effectively slow them down. If these zombies appear in large numbers, which they sometimes do, those plants along with Cactus, Laser Bean, Fume-shroom and Electric Peashooter are excellent counters. The butter puddles Buttercup creates can instantly kill Pelican Zombies, although they are flying zombies and not exposed to the buttered tile.

Note: Avoid using Citron against this zombie (unless fed with Plant Food) as their fire rate is slow. Additionally, this zombie can reach Citron fast or possibly even destroy it before it can fire a plasma ball. 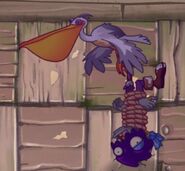 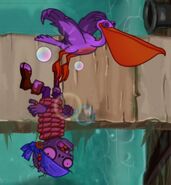