For the version in Plants vs. Zombies Heroes, see Peel Shield (PvZH).

30 sec.
Harnessing cutting edge bio-citronics, the Peel Shield absorbs all incoming damage while still allowing you to shoot through it!

Peel Shield is the third ability for Citron in Plants vs. Zombies: Garden Warfare 2. When used, the Citron will create an orange shield in front of himself. The shield has the capability of absorbing incoming damage for a maximum of 30 seconds. It can withstand up to 75 damage before the shield disappears.

Harnessing cutting edge bio-citronics, the Peel Shield absorbs all incoming damage while still allowing you to shoot through it!

The Peel Shield is an amazing tool if used properly, as it essentially boosts Citron's health up to a monstrous 275. However, knowing when to activate the Peel Shield is necessary for any Citron player, as using it at the wrong time will accomplish nothing.

The in-game tips will tell the player to activate the Peel Shield early. This is one of the most important parts of using Citron, as if the Peel Shield is deployed too late, zombies will vanquish Citron easily before the shield comes up.

Keep in mind that the shield only has 75 health. Characters like the All-Star can quickly tear through the shield, hence the player's health still plays a large part of the firefight. The Peel Shield will not save you if you go into a fight with a Foot Soldier with only 50 health left.

Lastly, remember that some abilities can cancel the Peel Shield outright, rendering the ability useless. However, Citron usually has enough health to last through the ability, after which the player can put up the shield. Other abilities can achieve a similar effect because of their insanely high damage output, quickly shredding through the shield.

The Peel Shield gives the opposing Citron a safety net to fall back on and can be a deciding factor in fights. Unless you're confident you can break the shield and survive the Citron's attacks, stay away from Citrons with their shields up.

Some abilities can neutralize the effect of the Peel Shield either by canceling it outright or destroying the shield extremely quickly. Such abilities include Sonic Grenade, Big Bolt Blaster, and Gravity Grenade. All of these except the Big Bolt Blaster can be used to open an attack. Even though the Z-Mech will destroy the shield in a matter of seconds, the EMPeach will disable them long enough for Citron to easily destroy the Z-Mech. 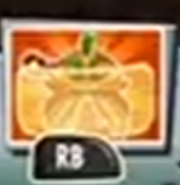 The ability as seen in the remembering scene