All Plants and Zombies attack using their

.
No one knows where he came from. He just appeared one day. But everyone who comes in contact with him feels... changed somehow.
Pecanolith is a galactic legendary plant card in Plants vs. Zombies Heroes and a member of the

He does not have any traits, and his ability makes the amount of damage all plants and zombies do equal to their health stat. This ability persists until all Pecanoliths are removed from the field.

He is based on the pecan (Carya illinoinensis), a species of hickory native to Mexico and the Southern United States; and the monolith from the film 2001: A Space Odyssey.

His name is a portmanteau of "pecan," the real-life plant he is based on; and "monolith," a geological feature consisting of a single massive stone or rock.

His description references his ability and the description of the monolith and its anomalous properties upon touching in 2001: A Space Odyssey.

No one knows where he came from. He just appeared one day. But everyone who comes in contact with him feels... changed somehow.

plant for 5 sun, this plant can easily turn the tide of the battle very quickly. His ability affects plants and zombies alike, and can prevent some high-strength zombies like Exploding Imp or Newspaper Zombie from doing major damage.

However, his main use is to utilize the Guardian class' high-health plants such as Wall-Nut, Water Chestnut, and Garlic.

These plants will be able to fight back with heavy damage, while still being able to defend themselves. Many of these cards are also cheap, meaning that you can replenish your defenses without spending too much sun. Cards that boost plants' health such as Photosynthesizer, Steel Magnolia, and Grape Responsibility also synergize nicely. Be aware that Pecanolith, as well as many of the plants mentioned above, are vulnerable to Weed Spray due to having low or no strength.

This card is very useful against the

Sneaky classes, as they consist of mainly low-health fighters, with only a few exceptions.

It does well with Threepeater, given that it has high health and it attacks in 3 lanes. It will cause some trouble for the Opposing Team. However, only Citron or Beta-Carrotina can normally do this.

Take note that fighters with offensive traits such as the

Anti-Hero being the only exception), making plants such as Cactus much more effective.

Three-Nut is a good plant to play before it, such as while it will not affect your plants' actual strength, they can be rendered immune against the majority of instant-kill tricks, save for knockout (which can destroy up to 2 plants in a lane with 3 or less strength), locust swarm, B-Flat and soft removals like exploding fruitcake.

Each Guardian hero has their way of using this plant well:

Being a nut plant, you can use this with either Smackadamia to boost his health or Mirror-Nut to make your opponent think twice before playing damaging tricks him.

Avoid using this if there are many high-health zombies like Overstuffed Zombie and Wannabe Hero. This will compound your problems as they will do more damage, especially if these zombies have

Because of his nut tribe, Squirrel Herder can take him out instantly, so watch out for her.

There are also 2 important things to note about Pecanolith. It cannot modify strength, meaning that zombie cards with strength-based targeting can still affect eligible plants, and vice versa. While a fighter's strength is equal to its health before combat, they will inevitably get weaker and weaker as they absorb damage, to the point where they become manageable for your opponent. You will therefore suffer significantly if you don't have health-boosting/healing/high-health plant cards as your opponent can abuse his ability and keep him on the field for their advantage.

Against Pecanolith, the best method is to remove him with a trick.

Hearty heroes can easily wipe the field with a single use of Weed Spray or use Rolling Stone on Pecanolith to remove him for a low price, since while nuts are bulky, they still technically have 0 strength. Other heroes may need to use

Because he is a nut plant,

Beastly heroes can use Squirrel Herder to instantly destroy this plant, although they must look out for Grave Buster or Blockbuster.

Crazy heroes can also use Exploding Fruitcake to instantly take him out.

Brainy heroes, however, will have to get creative and rely on card synergies or damaging tricks in order to destroy, or at least weaken him efficiently, if assistance from their secondary class is not avaliable.

Zombie decks that focus on low-health zombies like Imp or dancing decks will struggle, as this card will make them all do less damage, unless their health was boosted in some way. On the bright side,

Hearty heroes will be able to use health-boosting cards like Rock Wall and Healthy Treat to retaliate against Pecanolith if Weed Spray or Rolling Stone is unavailable.

They can also play high-health zombies such as Zombie King and Wannabe Hero, or

Armored zombies like Knight of the Living Dead to make their opponent think twice before using this. A powerful example is Overstuffed Zombie, who will heal himself to full (regaining all the strength lost) and gain additional health (which equals to extra strength). 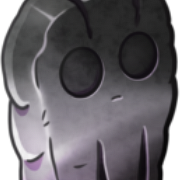 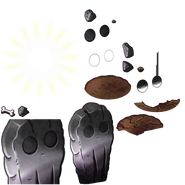 Pecanolith with a star icon on his health

Gigantic Pecanolith due to a glitch

Locust Swarm being played on Pecanolith

Time to Shine being played on Pecanolith

Exploding Fruitcake being played on Pecanolith