This zombie shoots peas at your plants.

(Cannot be damaged by peas)

ZomBotany
Only appears in ZomBotany and ZomBotany 2
Peashooter Zombie is a type of zombie only found in the mini-games ZomBotany and ZomBotany 2 in Plants vs. Zombies. It is the zombies' equivalent of Peashooter. It moves forward slowly and eats like any other zombie, but it constantly fires peas in front of it, even if there is no plant for it to fire at. Each pea deals half of a bite's damage. Like the other ZomBotany zombies, it has no Almanac entry.

In Plants vs. Zombies: Journey to the West, Peashooter Zombie will appear as a normal zombie starting in Outsmart the Fire Child.

Note that the description here is from the Plants vs Zombies: Official Guide to Protecting Your Brains

As they have low toughness, just kill them however you would to a regular Zombie. However, use defensive plants such as Wall-nuts to protect Sunflowers and other plants against their peas. If you like, use a Puff-shroom woken up by a Coffee Bean because a Peashooter Zombie is basically a regular zombie with the same speed and health as a normal zombie that shoots peas. Peas cannot hit the Puff-shrooms, and they can easily take down a normal zombie. Potato Mines, when armed, can instantly kill one of them, and they cannot be damaged by peas as well. Spikeweed and Spikerock also work, since they cannot be hit by peas, although it may take more than one, though (especially for other, tougher ZomBotany zombies). Garlic would also work to divert this zombie into another more heavily defended other lane, although you would have to pay close attention to quickly refresh them. Speaking of Garlic, they have a higher amount of health than most other plants, meaning they can be used instead of other defensive plants to block Peashooter Zombie's peas if you are going for Wall-Not Attack, as they don't count as a defensive plant.

A Peashooter Zombie without an arm 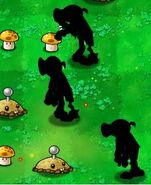 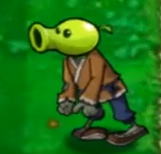