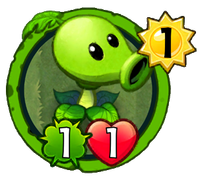 None
Started fighting Zombies in 2009... and never stopped.
Peashooter is a basic common plant card in Plants vs. Zombies Heroes and a member of the

It is the basic plant of the Mega-Grow class.

It is based on the plant, Peashooter in Plants vs. Zombies with the same name and appearance.

The advantages of Peashooter is that it only costs 1 sun and is given at the start of the game. But other than that, it does not have any useful merits, so it should be replaced as soon as possible when you get stronger plant fighters such as Party Thyme or Bonk Choy while progressing through the game.

If you need to give this plant a boost, use Torchwood for extra strength at a cheap price, or The Podfather for extra strength and health at a slightly more expensive price, as Peashooter is a pea plant. Additionally, tricks such as Embiggen work too. However, saving these boosts for stronger plant fighters later in a battle may be more beneficial.

It is important to note that Pea Pod is a complete superior to Peashooter, as both are in the same tribes, classes, and with the same cost and starting stats, but Pea Pod has a useful ability while Peashooter does not. So, this plant serves as nothing more than an extra plant to use in pea decks once enough Pea Pods are obtained.

Clique Peas is also a complete superior to Peashooter, as they have +1/+1 counting the boost and can possibly get bigger, they give you more of them, and also, they also have the Bean Tribe.

This plant is considerably easy to counter due to its low base stats and it lacking any traits or abilities, so you should be able to destroy this with almost every zombie fighter, or damaging tricks such as Nibble. However, if Torchwood or The Podfather is used with this, take caution, as this could easily become a minor threat for a cheap price. Fireworks Zombie and Barrel of Deadbeards can easily remove this from the field, assuming its health isn't boosted.