Peashooter is armed with a Chili Bean Bomb, which allow the players to vanquish multiple zombies within the blast range. The alternate ability, Sombrero Bean Bomb, has a longer fuse, but deals more damage and has longer range. Peashooter can fly into a Hyper ability which increases the speed and also how high he jumps, used for getting on the rooftops sometimes. The alternate ability, Super Pea Jump, allows the Peashooter to jump very high (higher than Hyper) but remains the normal movement (without Hyper). Peashooter also can root himself down and transform into a Pea Gatling which can fire up to 100 peas, which deal a lot of damage. The alternate ability, Retro Gatling, can deal more damage but has slower rate of fire and has half the ammo.

Every Peashooter has 125 health (except the Agent Pea, whose health was reduced to 100 in the Legends of the Lawn DLC and the Rock Pea, who has 150 health) and most deal splash damage, which each have their own unique abilities. Peashooters can deal more damage when aiming with critical hits, with a max of 37 damage by the upgraded standard version.

Peashooter is always in the front line fight against any Zombie invasion. He likes to play things fast, loose, and frantic adopting more of a run and gun mentality. When he sneezes he's a danger to both himself and others around him.

Pea Cannon is the primary weapon of the Peashooter. All info below is when fully upgraded.

Grown from only the finest plant food, the Peashooter's reload time has now decreased.

These super peas are so super, they increase pea damage.

The Peashooter could be considered an all-around class, possessing no overwhelming strengths or weaknesses.

Perhaps his biggest gift is his splash damage, something very few plant classes have. This allows the Peashooter to effectively combat against groups of zombies. He also has a decent fire rate to help. His reloading time is also very fast, which makes him a good front-line assaulter. To further compliment this, his Chili Bean Bomb is very effective at catching players off-guard due to its radius and his rather short fuse. This, combined with the Hyper ability makes him a dangerous attacker; while being already difficult to hit with the increased speed, the Peashooter can jump around and attack, taking advantage of the splash damage, making him near impossible to shoot down, while gradually draining his opponent's health, forcing them to either accept their defeat, attempting to shoot at him, which is very hard to do, or retreat. However, the Peashooter is also very good at chasing zombies with his Hyper. Furthermore, his splash damage allows him to hit running targets with little difficulty. If the Peashooter is losing, he can use Hyper to retreat safely, or continue to attack the zombie while making himself a difficult target.

The Peashooter remains hazardous at long distances, either, for the Pea Cannon is an effective tool to hit snipers hiding behind cover due to the splash damage. His Pea Gatling does massive damage to zombies that are distracted, however, be wary of the Foot Soldier's ZPG, as you are incapable of moving while rooted. Lastly, Hyper gives the Peashooter a significantly boosted jump height to get to elevated areas with good view, something that not many plants can accomplish easily. Super Pea Jump allows the Peashooter to jump even higher, making it ideal for reaching high vantage points but the ability must be unlocked before becoming usable and it grants no speed boost.

This often gets overlooked by both sides, but the Peashooter is the character with the smallest hitbox in the Plant faction (he even beats the Sunflower in this aspect), making him a lot harder to hit when compared to other characters. The only character that has a smaller hitbox than the Peashooter, is the Imp.

However, the Peashooter does have some detrimental flaws. His direct hit damage is, while still significant, somewhat unimpressive. His peas make a lot of noise when fired and when the hit the ground (and they leave visible splash marks), drawing the zombies' attention. The Peashooter is very vulnerable when rooted, and just shooting one bullet makes the ability to enter cooldown, so great care must be taken when using it. His Hyper, while granting it a great boost to its speed, it also significantly reduces its accuracy, and the splash damage, while still harmful, is low at just 10 damage, so try to use it only to finish off weakened foes or harass enemies behind cover. The Peashooter's ability to reach high ground is counterbalanced somewhat by its poor zoom and the somewhat slow travel time of its primary weapon's projectiles (which are very visible too), thus making him an ineffective sniper.

Overall, the Peashooter's pros and cons are very balanced, and due to his ease of use, he is very popular among new players but if put into the hands of a skilled player, he can easily tackle groups of Zombies singlehandedly.

In Garden Ops, Peashooters are important, due to their strong offense and abilities, which other classes do not have. Peashooter is capable of fighting waves of zombies highhandedly; but Peashooter still needs support from other classes, especially fighting bosses in the fifth and tenth wave. His Chili Beans are very powerful in Garden Ops, since it attracts multiple zombies near it before it explodes. However, Zombie Heroes and Bosses are immune to Chili Bean Bomb attraction, but still take major damage if they are near it. The Hyper ability enables Peashooter to move quickly, allowing him to flee battle when health is critical, or to reach certain locations quickly. It can also be used to jump on top of high places, where it will be a good view to attack the Zombies. Gatling ability gives Peashooter extra firepower, allowing him to vanquish strong zombies or bosses, but restricts the Peashooter's movement until the player deactivates the ability.

Peashooter's biggest advantage is the Hyper ability. Hyper makes Peashooter move faster and jump higher, making it difficult to hit him. Hyper also allows Peashooter to get to higher ground, or catch up with fleeing opponents or fleeing away from a losing battle. Hyper works extremely well with Pea Gatling and Chili Bean Bomb ability. Chili Bean Bomb with Hyper allow Peashooter to catch unexpected opponents. During Hyper, find a suitable location, and switch to Pea Gatling to dish out massive damage on your opponent.

The Peashooter is the top priority to defending a Garden in Gardens & Graveyards. Peashooters can throw their Chili Bean Bomb into the Garden to blow up the bulk of the zombies whenever they try to group-rush the Garden. Using Hyper helps Peashooters get around the large map easily. Rooting and using the Pea Gatling can take down teleporters in a matter of seconds (but watch out for counterattacks), therefore evening the odds by denying the Zombies from gaining any logistical advantage. Peashooters should keep moving and never stop at all costs (unless they are on high ground or out of reach from zombies), and should watch out for the Engineer and its Sonic Grenade, as it can severely slow the peashooter down, making him an easy target. During times of no fighting, Peashooters should focus on keeping Foot Soldiers off from rooftops or other sniping points, or on breaking up small groups of zombies.

Peashooters can be important for this mini-game in many situations. First of all, the Chili Bean Bomb/Sombrero Bean Bomb can damage zombies defusing a bomb, or zombies planning to set a bomb. The Hyper ability can be useful for being the first to plant a bomb, however, you are restricted from using your secondary abilities when holding the bomb, so provide cover. Pea Gatling/Retro Gatling can be useful for the situations faced by Chili Bean Bombs above if Chili Bean Bomb is recharging or to use for fun.

Peashooters will be as important as in Gnome Bomb and the same strategies above for Gnome Bomb work for this mini-game too. Throw a Chili Bean Bomb or root in Pea Gatling to protect your garden from being captured by zombies. The Hyper ability is useful for getting to a garden quicker and capturing it.

Chili Bean Bombs can be useful for taking down zombies stealing Dave's tacos. They can't use their abilities while holding the Taco so they are significantly easier to take down. Peashooters can root in Pea Gatling in front of or near Dave's tacos to protect it from the zombies trying to steal them.

The Peashooter's high offensive power now makes it\\him the best assault class on the plant team (along with Kernel Corn and to some extent Citron). Out of these three, the Peashooter is the most fragile but also the most agile, making him ideal for attacking Zombies head-on with the Kernel Corn or Citron providing fire support. If the Citron or Kernel Corn is the one that starts the fight, then the Peashooter can do a total of three things to help his ally. One, he can use his Hyper to run and jump around the targeted Zombie while providing support by shooting peas at his target, two he can use Hyper (or Super Pea Jump) to jump up to a high vantage point and provide support from there or three, he can root himself with Pea Gatling and turn himself into a stationary Sentry Gun and mow down the zombie his ally is fighting.

The Peashooter can also be useful for helping the Rose in setting up Teleporters since the Peashooter's high offensive power, coupled with the Rose's magic tricks, becomes a great combo for clearing out any zombies guarding the teleporter.

Promo art of Peashooter with Chomper and Sunflower

A view of the Peashooter 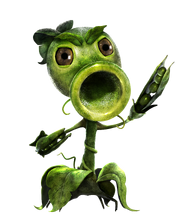 Promo art of Peashooter
Add a photo to this gallery 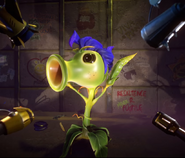 A Peashooter surrendering in a trailer 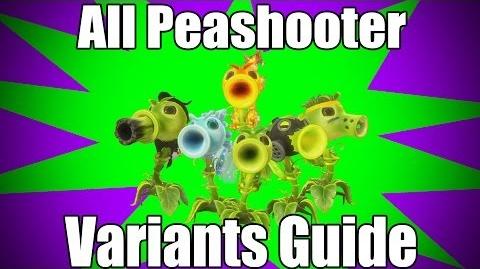 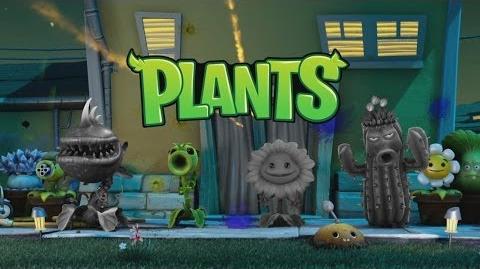 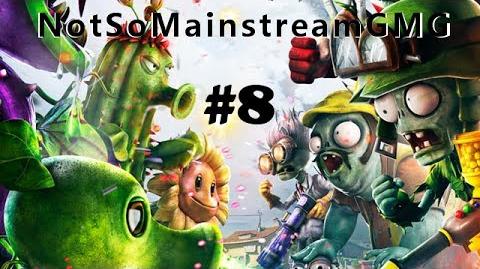 Retrieved from "https://plantsvszombies.fandom.com/wiki/Peashooter_(PvZ:_GW)?oldid=1265192"
Community content is available under CC-BY-SA unless otherwise noted.