Peashooters are highly versatile plant combatants. They provide plenty of explosive damage and are effective against smaller targets.

Peashooter is a playable plant class in Plants vs. Zombies: Battle for Neighborville. He is is an

Attack class who specializes in combat versatility and explosive damage, via either his primary weapon, or his Chili Bean Bomb.

Peashooter's primary weapon is the Pea Cannon, an explosive projectile that deals 34 impact damage and 14 splash damage, fires at a rate of 100 RPM (rounds per minute) and has a slow projectile speed. Peashooter can fire 10 times before needing to reload.

One can utilize Peashooter's fast moving speed by making themself a hard target for the opponent to hit, moving side to side or by jumping a lot (Bunny Hoping) until the target is vanquished. Using Pea Suped will accomplish this task much more easily.

One needs to be careful when encountering a Peashooter as his primary weapon does a hefty 34 damage and has high splash damage which poses a risk even if you manage to avoid a direct hit. Try and keep your distance and take him out from afar, Peashooter's health is mediocre so it is only required to land a few hits to vanquish him. Stay away from tight spaces as Peashooter can deal quite a large amount of damage in a large area. The character you will need to be careful the most is the Imp with a measly health of 75 HP he can be easily vanquished by Peashooter. 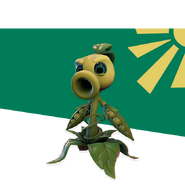 Retrieved from "https://plantsvszombies.fandom.com/wiki/Peashooter_(PvZ:_BfN)?oldid=2281056"
Community content is available under CC-BY-SA unless otherwise noted.