None
Has codependency issues, but he's working on it.
Pear Pal is a colossal uncommon plant card in Plants vs. Zombies Heroes and a member of the

Smarty class. He can also be made by Pair of Pears.

. He has the Team-Up and Amphibious traits and does not have any abilities.

He is based on the unused pear plant planned fot the Chinese-exclusive turn-based game Plants vs. Zombies: All Stars with a similar appearance.

His name is a combination of the words "pear," the Plants vs. Zombies plant he is based on, and "pal," referring to the fact that he is usually with Pair of Pears.

His description may reference his Team-Up trait.

Has codependency issues, but he's working on it.

Any strategies that apply to Puff-Shroom also apply to Pear Pal. Just take note that he cannot benefit from Punish-Shroom or Buff-Shroom due to his lack of the mushroom tribe. However, since he has the Amphibious trait, he can be boosted with Navy Bean. And due to his Team-Up trait, you can also easily use this to protect a powerful plant or in a Team-Up deck with Go-Nuts.

Pear Pal is an easy plant to deal with. Zombies with at least 2 strength or tricks such as Bungee Plumber and Rolling Stone can deal with him effectively unless he has been boosted. 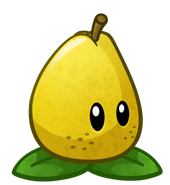 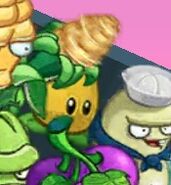 Pear Pal in the Multiplayer menu

Terrify being used on Pear Pal

Pear Pal with the 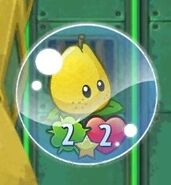 Bubble Up being used on Pear Pal 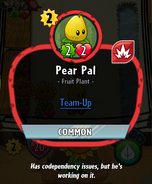 Pear Pal being the featured card in the menu for the May 27th, 2017 Daily Challenge