When destroyed: Make a 5

Grizzly Pear with Amphibious here.
So cute and cuddly and ... wait, what's that growling sound?
Pear Cub is an event plant card in Plants vs. Zombies Heroes and a member of the

They have the Amphibious trait, and their ability makes a Grizzly Pear on their place when they are destroyed. The closest zombie counterpart is Barrel of Deadbeards.

They are based on a pear, a pomeaceous fruit created by pear trees, and a bear, a mammal in the family Ursidae.

Their name is a portmanteau of "pear," the fruit they are based on, and "bear cub," the young of the aforementioned animal.

Their ability and description are a reference to how an adult animal will protect cubs when they are threatened.

So cute and cuddly and ... wait, what's that growling sound?

Pear Cub is very weak for their cost, but makes up for its ability to spawn a powerful plant at very little cost.

Since they have the Amphibious trait, they are useful at preventing Amphibious zombies from continuously doing damage to you. Their Amphibious trait also lets then get boosted by Navy Bean, though only Citron and Beta-Carrotina can do this normally. If your opponent lacks Amphibious zombies such as Rustbolt, Z-Mech, or Professor Brainstorm, they can cause issues for them, especially when they boosted.

You can boost their stats to put your opponent in a dilemma, though if they end up with higher stats than Grizzly Pear, your opponent can simply choose to destroy them without any hesitation to actually weaken them. However, Grass Knuckles, when against an enemy with neither environments nor lots of removals, he can play The Red Plant-it, which gives every plant within a massive stat boost so that if the Cub would be a big threat on his own, and an even bigger threat if it makes the Grizzly Pear.

Since their ability makes another plant, Muscle Sprout and Astro-Shroom work well with them, although they aren't the best at it.

Take caution when playing them in unprotected lanes, however, as smart opponents may keep that lane open to get an easy superpower or two at no real risk to themselves. If you play as Grass Knuckles, you can force a zombie to attack it with Whipvine or Sweet Potato, though.

A useful strategy with Pear Cub is to use environments that do damage to or weaken plants such as Total Eclipse or Trapper Territory to your advantage. Playing Pear Cub in one of them can actually result in them activating their ability due to them destroying Pear Cub, and because those environments' abilities take action before combat, it can result in a much more powerful attack from that lane than expected. Spudow can also use Hot Lava, which can also damage Pear Cub and activate their ability.

Another strategy good for Pear Cub is to put Galacta-Cactus on the field in front of a zombie that can destroy it and the Pear Cub on the water lane, having the Galacta-Cactus destroy Pear Cub and creating a hard-to-remove Grizzly Pear on the amphibious lane.

Think of Pear Cub as Barrel of Deadbeards for the plants side, except that they do not do damage to all fighters on the field when destroyed, but instead makes a stronger fighter on their place instead. Do not get lured by Pear Cub's weak stats. If you think you cannot handle Grizzly Pear with what cards are in your hand, do not destroy Pear Cub. It is better to take little damage to prepare for a safe fight than to recklessly destroy them and put yourself in danger. But also beware, as unlike Barrel of Deadbeards, your opponent has near-total control of this card, as plants play after zombies.

One way to deal with them is to prevent them from being destroyed. If Pear Cub is actually played on a lane with a powerful zombie, you can play Smoke Bomb to move that zombie away, or Terrify to move Pear Cub away. You can also play Shrink Ray or Landscaper to remove their strength, which renders it useless unless it takes damage.

Another way is to play a zombie that can destroy both Pear Cub and Grizzly Pear alone. giving zombies Frenzy in the tricks phase with the cards like Going Viral and Area 22 is the best way to deal with Pear Cub. While Vimpire may seem a good counter to the Pear Cub, good plant players play the Pear Cub in front of a zombie.

Do not use Fireworks Zombie or Barrel of Deadbeards against Pear Cub unless the circumstances are in your favor, as it can only leave you in a tough spot. This also applies to area of effect cards like Weed Spray and The Chickening.

Also, if you have a Trapper Zombie in play and Pear Cub is played, do not play Trapper Territory on their lane when he is revealed, as doing so will activate Pear Cub's ability before they attack. 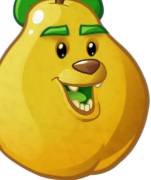 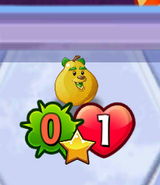 Pear Cub on the advertisement for the Event Rewind Bundle

Gigantic Pear Cub due to a glitch

Three Pear Cubs on the field 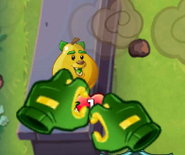 Pear Cub with the

Time to Shine being played on Pear Cub

Pear Cub being the featured card for the May 7th, 2020 Daily Challenge