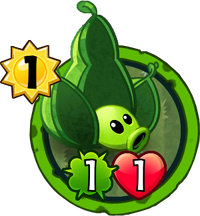 For the Plants vs. Zombies 2 version, see Pea Pod.

Start of each turn: This gets +1

.
Sometimes they squabble, but they usually get along like five peas in a pod.
Pea Pod is a premium uncommon plant card in Plants vs. Zombies Heroes and a member of the

at the start of every turn, starting from the next turn after they are played.

Their description is a reference to the idiom, "peas in a pod".

Sometimes they squabble, but they usually get along like five peas in a pod.

Despite being an early-game play, Pea Pod does not do well in said phase; although they do have a self-boosting ability, there are a few plants that outclass them due to them having better stats (for the current turn) or being cheaper. But as Pea Pod gradually gains stats over time, they can prove to be a powerful card if you strengthen them well and give them an adequate amount of protection. And while the great amount of care required for protecting them can go to waste if your opponent happens to have efficient removal cards like Rocket Science and Rolling Stone, the Mega-Grow class has access to Umbrella Leaf, which can make Pea Pod

Each Mega-Grow hero generally has an effective way to protect Pea Pod besides boosting them:

Potted Powerhouse is a great card to pack along with Pea Pod, as she gains stats each turn every time Pea Pod activates their ability while she is in your hand.

Destroying Pea Pod early while their health is still low should be a priority. If Pea Pod hasn't gained much strength or health, Bungee Plumber, Rolling Stone, Weed Spray, and The Chickening should help (although the latter should only be considered against swarms of Pea Pods). If this plant gets out of control, play Locust Swarm, Rocket Science, or Cut Down to Size. If you are playing as a

Sneaky hero, zombies with the

Deadly trait are also an option. Bouncing them also works, as their stats will be reset. 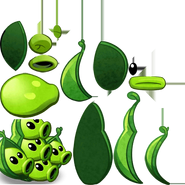 Time to Shine being played on Pea Pod 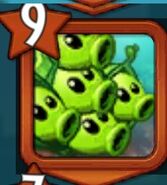 Pea Pod as the profile picture for a Rank 9 player

Three Pea Pods in the mulligan section with a Pea Patch 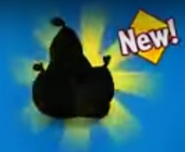 The player receiving Pea Pod from a Basic Pack

The player receiving Pea Pod after completing a level