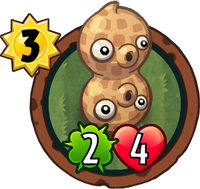 For the version in Plants vs. Zombies 2, see Pea-nut.

None
"Mom was a Peashooter. Dad was a nut. Everyone said it wouldn't work, but they were wrong."
Pea-Nut is a premium uncommon plant card in Plants vs. Zombies Heroes and a member of the

. They have the Team-Up trait and do not have any abilities.

They are based on the plant, Pea-nut in Plants vs. Zombies 2 with the same name and appearance.

"Mom was a Peashooter. Dad was a nut. Everyone said it wouldn't work, but they were wrong."

Pea-Nut is only an average plant with no abilities. And compared to many other nuts, they are rather inferior from a tanking standpoint, as they have less health than many other dedicated tanks. Since both nut synergy plants, Smackadamia and Mirror-Nut, favor cheap, high-health nuts, they don't fit as a good synergy plant either. The only advantage Pea-Nut has is their base strength, which increases the damage output slightly to whatever is on their lane. Pea-Nut, however, has a spot in Grass Knuckles' pea deck, where they can become a strong Team-Up plant with The Podfather's help.

Since Pea-Nut is a nut plant, Squirrel Herder is able to destroy them once she is revealed, although you should be on the lookout for Grave Buster. This plant is also vulnerable to Weed Spray and Rolling Stone, due to their low strength. If their strength is boosted to 4 or more, they will be vulnerable to Rocket Science instead.

Retrieved from "https://plantsvszombies.fandom.com/wiki/Pea-Nut_(PvZH)?oldid=2341953"
Community content is available under CC-BY-SA unless otherwise noted.