For the version of this plant in Plants vs. Zombies: All Stars, see Passionflower line.

Launches gears that attack the nearest zombies and causes continuous damage to zombies in its range.

Passionflower is determined to become an engineer, but can only build gears for now.

Passionflower (番莲工程师; pinyin: fān lián gōngchéngshī) is a plant from Steam Ages in the Chinese version of Plants vs. Zombies 2. It attacks the closest zombie in either its lane or the lanes above or below it by firing gears at it.

Once these gears hit a zombie, the gear will freeze in place, hitting zombies multiple times before disappearing, similar to Monkeyfruit's bar.

When fed Plant Food, Passionflower will produce a gigantic gear, before throwing it at the nearest zombie. This gear lasts longer than the normal gear, and does damage to zombies in a 3x3 radius.

It now launches a massive fast rotating gear that can slow down zombies.

Passionflower and Monkeyfruit share many similarities in terms of attacks. Only that she is able to attack both lanes above and below her. Her gears (same as Monkeyfruit's bar) freezes in place when it hits a zombie or obstacle, and does continuous damage until it disappears. This makes this plant a good counter against Gargantuars. Add to that is her ability to attack zombies in lanes adjacent to her.

When planted in vast numbers they can easily overpower a Gargantuar, this includes tough zombies such as Pharaoh Zombie , Machines, etc. She also does well with leveled up zombies, but only if the Passionflower are in vast numbers since they focus on one target, and the gears they fire do individual damage. But this also makes them vulnerable to speedy threats such as a charging all-star zombie, enraged newspaper zombie, and the like. Since her firing rate is also quite sluggish, its best to bring defensive plants such as Wall-nut (PvZ2), Tall-nut (PvZ2) , etc. If the player's Passionflower is still level one, its best to bring stalling plants such as Stallia, Stunion, or iceberg lettuce to maximize her full potential, it is because if the zombies are stunned/frozen, the gear does continuous damage to them while they can't do anything about it, this proves useful if the zombies are leveled up.

Or the player could use slowing plants like Snow pea, Winter melon, etc. But if she reaches level 3 she may no longer need stunning/stalling plants, because she gains the ability to slow zombies with her gear, and could even stun them with a fast rotating gear. Overall she is a very of useful plant if used correctly, but she also has a downside, first is that when a group of Passionflower defeats a zombie, they will still continue to attack the zombie despite its head was already cut off, as long as that zombie is the closest. Lastly is her slow rate of firing, makes her vulnerable when there are a vast number of zombies around. But her downsides can be solved easily with the right pair of plant, and a small price to pay for a plant that can attack on adjacent lanes, and could do continuous damage in a 1x1 area.

Treat her as a cheaper alternative of Monkeyfruit that can attack on the lane above or below it. However, once the player gets Monkeyfruit, they should use Monkeyfruit over this due its attack power. It also has a lackluster Plant Food effect since it's only guaranteed to kill at least 1 zombie if not timed correctly. However, it is easier to obtain and level up via Plant Adventures, and can attack zombies in the lanes adjacent to it, not to mention it gains a chance to stun zombies when upgraded to level 2, in which monkeyfruit is not able to do and it's puzzle pieces are easier to obtain due to it being included in the plant adventure. 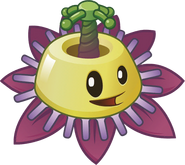 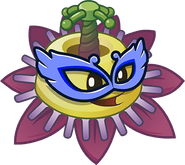 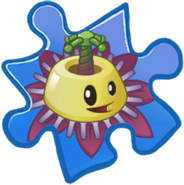 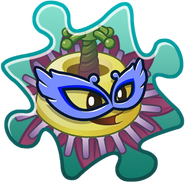 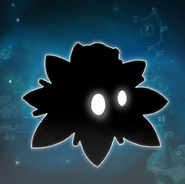 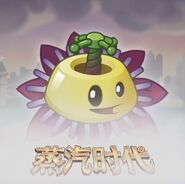 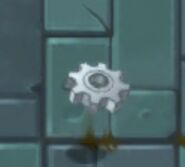 Passionflower on a Gold Tile