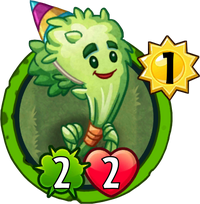 When a Plant does a Bonus Attack, draw a card.
A real extrovert, this one.
Party Thyme is a premium super-rare plant card in Plants vs. Zombies Heroes and a member of the

. It does not have any traits, and its ability draws a card every time a plant, including it, does a bonus attack. This ability stacks with every Party Thyme on the field and persists until all Party Thymes are removed from the field.

It is based on a bundle of thyme, an evergreen herb of the genus Thymus with culinary, medicinal, and ornamental uses.

Its name is a portmanteau of the phrase "party time," referring to its birthday hat and cake, and "thyme," the real-life plant it is based on.

A real extrovert, this one.

Party Thyme is one of the hardest cards to use in the game, due to its situational ability and bad stats in later turns, as its ability requires bonus attack cards to be played, which can only be done starting from turn 3, where by then your opponent has a lot of ways to remove Party Thyme. such as Bungee Plumber and Extinction Event.

You could try playing the following cards to activate its ability. However, each has their own weaknesses:

In short, this card is very bad and should not be used as all.

This card might be dangerous due to its ability but Party Thyme is not a good card. Hence you will hardly see it played in any serious deck.

In the off-chance you do encounter it, Bungee Plumber and Rolling Stone can put an end to it. Keeping ahead of your opponent stat-wise can also deter your opponent from just playing any of Party Thyme or any of its support cards, as they would most likely get destroyed before they can activate their bonus attacks. Anti-trick cards like Fraidy Cat and Defensive End can help make playing bonus attacks via tricks not as worth. Cards that can reduce the plant's strength to zero such as Black Hole and Landscaper can also shut down bonus attacks with the exception of Plant Food. Bonus Track Buckethead can completely nullify Party Thyme's ability while Quickdraw Con Man punishes card draws by doing 1 unblockable damage to your opponent.