Legendary
Party Rose is a Legendary Rose variant in Plants vs. Zombies: Garden Warfare 2. When the Party Rose gets enough vanquishes in a session, she will enter Party Time!, which makes her move faster and deal higher damage, similar to the Computer Scientist's Crunch Mode.

The Party Rose cannot be unlocked through normal methods, which are sticker packs (excluding the Infinity Packs). Instead, the player must open Infinite Infinity Chests in Infinity Time to get her stickers, and that means he or she has to collect at least 25,000 Time Shards in that mode to have a chance at unlocking her.

Party Rose suffers greatly from being a Party variant, and dealing with the new balance changes of her vanilla counterpart, making her a very situational and very weak option compared to other Rose variants. Party Rose appreciates the minor damage bonus and the speed bonus provided by "Party Time!" but it will be very difficult to achieve this mode for times you need it, whether against the AI or against players, since its damage output is shockingly weak until then. A strategy to achieve the Party Time is vanquishing one zombie at a time or hide if low on health. Use spells as in danger. If you are in Party Time!, note that activating Arcane Enigma stops the Party Time.

The only thing you need to be wary of is her crowd control ability, as her thistles are very weak and only reach slightly above the damage her vanilla counterpart can achieve once it enters "Party Time!". She is very rare in multiplayer, but as always, avoid her spells and you will have no issue dealing with her. 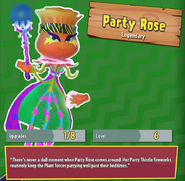 Party Rose as she appears in the Stickerbook 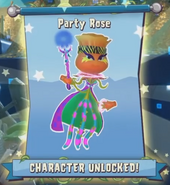 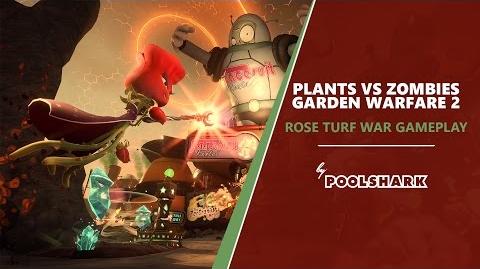 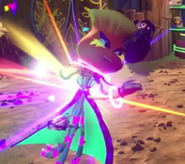 Party Rose in Party Time! using a gesture
Add a photo to this gallery

Retrieved from "https://plantsvszombies.fandom.com/wiki/Party_Rose?oldid=2023796"
Community content is available under CC-BY-SA unless otherwise noted.