Legendary
TBA
The Party Mech is a playable zombie Z-Mech variant in Plants vs. Zombies: Garden Warfare 2 as an alternate form for the Party Imp.

The Party Mech's primary weapon is the Party Robo Laser. The Party Robo Laser deals 7-11 impact damage and 8-13 critical damage based on the distance to the target, and overheats if fired for too long. When it is overheated, the weapon cannot be fired for a few seconds. Once it has cooled down, it can be fired again.

In Party Mech, strategies for the normal Z-Mech is applied here as well, since the Party Mech is basically exactly the same as the original Z-Mech (with the exception of design, that his Explosive Escape is replaced by the Explosive Party and its primary weapon, the Party Robo Laser, deals more damage than the default Robo Laser, however, it will overheat more quickly).

The Party Mech is similar to the regular Z-Mech, but recolored to match its theme; handle the mech like you would the default Z-Mech, but note that his primary weapon will deal more damage than its vanilla counterpart

Party Mech in action (after nerf) Front view of the Party Mech 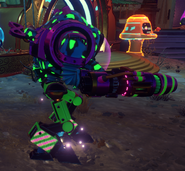 Side view of the Party Mech 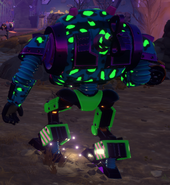 Back view of the Party Mech