Legendary
Party Corn was deep undercover, investigating a particularly raucous celebration when he heard about the Battle of Zomburbia. With no time to change out of his party garb, he sprang into action, Party Busters at the ready.
Party Corn is a Legendary Kernel Corn variant in Plants vs. Zombies: Garden Warfare 2. Like with other "Party" variants, when Party Corn gets enough vanquishes in a session, he will enter Party Time!, which makes him move faster and deal higher damage.

However, like other party variants, Party Corn's stickers cannot be obtained through sticker packs (excluding Infinity Packs), but instead the player must open Eternity Chests in Infinity Time to obtain the stickers to unlock him, meaning the player must get 25,000 Time Shards or more to have a chance at unlocking him. Like all Legendary variants, only two stickers are required to unlock him. He does 8-11 damage in Party Time! Normally, he does 6-9 damage.

Party Corn was deep undercover, investigating a particularly raucous celebration when he heard about the Battle of Zomburbia. With no time to change out of his party garb, he sprang into action, Party Busters at the ready.

As a Party Corn, be aware that your ammo count is slightly lower than the default Kernel Corn's clip. Play this Corn as you would the default one. Spray your weapon into zombies at close to long range, throw your Butter Barrage into groups of Zombies, Shuck Shot still or approaching targets and Husk Hop Zombies that come too close. Vanquish any AI zombies and Zombie turrets you come across as they fill up your Legendary meter. Be careful, as getting vanquished and then respawning resets the meter. Counter this by staying near a Sunflower (that you know will probably revive you). During "Party Time!", you will take less damage, inflict more damage and move faster. This doesn't mean that you are invincible. Move unpredictably to make it difficult for enemies to shoot you.

A Party Corn that isn't in "Party Time!" is still as big of a threat as the stock Corn, the Kernel Corn. Be aware that he has his Husk Hop and Shuck Shot abilities to defend himself with. This Corn is most dangerous when he enters "Party Time!". The damage reduction along with the increased movement speed make it very difficult to vanquish him. Try to take him out before he gets it. Like most big characters in this game, Party Corn is weak against Ice variants of Zombies. 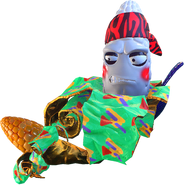 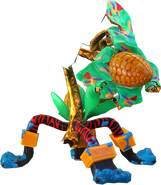 Party Corn in the customization booth