N/A
The Party Ball is just the average Citron Ball we all know and love, but with 110% more party!
Party Citron Ball is an ability exclusive to Party Citron in Plants vs. Zombies: Garden Warfare 2 that automatically replaces the Citron Ball ability. It is a renamed and retextured version of the aforementioned ability, with no difference other than its name, appearance, and description. 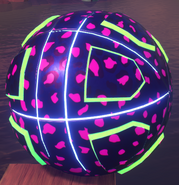