Super Rare
Ever since Stinky the Skunk rescued Park Ranger from a tree, they've been the bestest of pals. Now they're on a critical mission for Dr. Zomboss: Find where the Ranger misplaced his pants.
Park Ranger is a Super Rare variant of the Foot Soldier in Plants vs. Zombies: Garden Warfare 2. His weapon's projectiles leave behind small stink clouds for a moment after the shots hit, similarly to the spores fired by the Alien Flower. He was initially seen in the twenty seconds of gameplay released on October 29, 2015, which showed gameplay of Backyard Battleground, and the very first of many characters to have been revealed on sites such as Facebook or Twitter through short clips.

Ever since Stinky the Skunk rescued Park Ranger from a tree, they've been the bestest of pals. Now they're on a critical mission for Dr. Zomboss: Find where the Ranger misplaced his pants.

The primary weapon of the Park Ranger is Stenchy the Skunk.

Play this character like an Alien Flower, but with a faster firing, lower damage primary weapon. He is a great variant for weakening or vanquishing weakened enemies in groups. To take full advantage of the lingering cloud, remember to aim mainly at clusters of plants, namely those near objectives in modes such as Gnome Bomb or Turf Takeover. Plants gathered around a Heal Flower or Sunflower are also good targets. When shooting, focus your impact damage on Sunflowers or Heal Flowers, but still shoot haphazardly to spread the damage around. Your Zombie Stink Bomb and ZPG can also be used to deal even more damage in the group, provided that both land in the correct area. Stacking the Zombie Stink Cloud with the smoke left by Stenchy the Skunk is one of the fastest ways you can deal damage, so it is an important skill to learn.

Another good way to take advantage of Park Ranger's potentially extremely high damage output out be to play aggressively, as this can make it easier to direct the spore effect on an enemy. 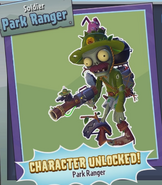 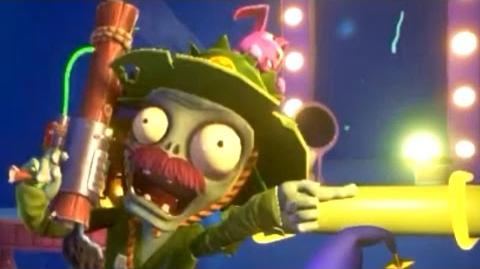