For the Plants vs. Zombies 2 version, see Parasol Zombie.

Zombies next door are

Untrickable.
Her favorite author is Brain Austen.
Parasol Zombie is a colossal super-rare zombie card in Plants vs. Zombies Heroes and a member of the

Untrickable trait, and her ability gives all zombies on the lanes adjacent to her the

Untrickable trait. This ability persists until all Parasol Zombies around the zombie are removed from the field. Her closest plant counterpart is Umbrella Leaf.

She is based on the zombie in Plants vs. Zombies 2 with the same name and appearance. Her ability is a reference to how she can block lobbed-shot projectiles, which in this game mostly manifests as tricks.

The author "Brain Austen" mentioned in her description is a reference to Jane Austen, an English novelist known primarily for her six major novels. Coincidentally, all of Jane Austen's major novels were set during the Georgian era, and Parasol Zombie wears clothing similar to women from that time period. Additionally, Parasol Zombie's internal name in PvZ2 is "lostcity_jane".

Her favorite author is Brain Austen.

Parasol Zombie has quite great stats for a 4

card. She also has an amazing trait, namely

Untrickable for herself and zombies next to her. This can make it tough for plants to destroy her and the zombies next to her, while having two makes every zombie essentially untrickable. You can play a very powerful zombie such as Nurse Gargantuar or Octo Zombie and do not have to worry much about plant tricks. Just be careful of abilities such as Jumping Bean's and Cob Cannon's, as they bypass the

Untrickable trait. You will also have to keep in mind that Gravestones are not protected by her ability.

The main issue for her is that she has no tribe synergy with other zombies. Even so, try to use cards like Intergalactic Warlord, Going Viral, or Hover-Goat 3000 that can benefit her.

If you are playing as Rustbolt, cards such as Rock Wall or Escape through Time can be used to boost her survivability, and by extension, your other zombies to remain unaffected by most plant tricks.

Immorticia is one of the best heroes to use this card with as she has access to both many strong zombies like Zombot 1000 and access to boosting tricks like Maniacal Laugh. As tricks are usually the tools used to counter these, combining them with Parasol Zombie makes it much more difficult to destroy these strong zombies. What makes this even more difficult is that unlike Umbrella Leaf, Parasol Zombie herself also possesses the

Untrickable trait as well as good stats, meaning it will also be difficult to remove Parasol Zombie before removing the strong zombie in question.

Parasol Zombie is a very tough zombie to destroy, namely her tough stats, her

Untrickable trait, and her ability. Due to this, you cannot use tricks like Whack-a-Zombie, Doom-Shroom, Squash, or Shamrocket to take care of her and the zombies next door. If she is played on an empty lane, the best counter for her is Chomper as it can destroy her unless boosted. Cob Cannon and Briar Rose are also effective. As a last resort, play glass cannons to damage her. Otherwise, you can stall by using Chilly Pepper or Jumping Bean to survive for a few turns and protect your defenses. The Great Zucchini can also render this useless, but he's usually plated in the late game and your opponent would usually win before then.

If there is an extremely dangerous zombie adjacent to her, cards such as Sweet Potato, Sweet Pea or Whipvine can move her away from the zombie (or vice versa), making it vulnerable to tricks. However, her

Untrickable trait can extend to almost all lanes, so be mindful. 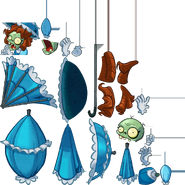 Two Fraidy Cats with the 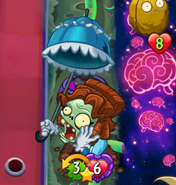 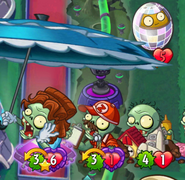 Parasol Zombie with the 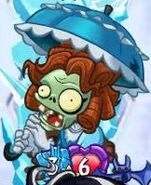 Parasol Zombie with the

Lurch for Lunch being played on Parasol Zombie

In-Crypted being played on Parasol Zombie

Possessed being played on Parasol Zombie