For the version in Plants vs. Zombies Heroes, see Parasol Zombie.

Her parasol cannot be damaged

(attack being lobbed, still damages her on impact)

Lost City - Day 7
Wealthy beyond reason, the Parasol Zombie lived a life of luxury - when what she craved was a life of adventure. She funded the expedition to the Lost City and set out to see its wonders for herself, never forgetting to bring her trusty parasol. "In case it rains," she explained - but it only came out sounding like "Brains".

Parasol Zombie is a zombie encountered in Lost City in Plants vs. Zombies 2. She protects herself and other zombies behind her from lobbed shots by using her parasol. The only way to damage her is by non-lobbed projectiles, such as peas, lasers, or explosives, Spikeweed/Spikerock, Bonk Choy, Wasabi Whip and splash damage from lobbed plants, like melons.

She is named after the item she holds: a parasol (also called an umbrella), a folding canopy supported by wooden or metal ribs, which is usually mounted on a wooden, metal, or plastic pole, that is designed to protect a person against sunlight.

Her appearance is based on women's fashion from the 19th century, and is also a reference to Jane Porter from Tarzan of the Apes. Also, she is referenced in the code of the game as "lostcity_jane."

Wealthy beyond reason, the Parasol Zombie lived a life of luxury - when what she craved was a life of adventure. She funded the expedition to the Lost City and set out to see its wonders for herself, never forgetting to bring her trusty parasol. "In case it rains," she explained - but it only came out sounding like "Brains".

She is immune to attacks from those plants:

Parasol Zombie is a dangerous zombie, especially in large numbers. She does not only protect herself from lobbed projectiles, but also the zombies behind her. When she appears with a group of Excavator Zombies and Porter Gargantuars, they can cause massive damage on the lawn. Lobbed-shot plants (Cabbage-pult, Kernel-pult, Melon-pult, Winter Melon, Pepper-pult, A.K.E.E., small berry of Strawburst, Spore-shroom, Blooming Heart, Dusk Lobber, and Apple Mortar) are useless against this zombie. To damage them, the player should use plants that shoot projectiles forward, such as Peashooter and Red Stinger. Plants whose attacks can pierce through multiple zombies, such as Laser Bean and Fume-shroom, are useful for damaging several of these zombies in a row, as well as Excavator Zombies if they are also present. Snapdragon, Cold Snapdragon, Missile Toe and Banana Launcher are also useful against Parasol Zombie and Excavator Zombie. Do not count on Lava Guava's 3x3 explosion to hurt Parasol Zombie, because her parasol also deflects the lava created by the explosion. Parasol Zombie is affected by the resulting lava pool, however. Spikeweed and Spikerock also can damage this zombie, but it is advised to plant a defensive plant behind the Spikeweed or use a Stallia with it because of the Parasol Zombie's speed.

A Parasol Zombie and Excavator Zombie pair can be very hard to defeat, because they move very fast and can stop any projectile. Instant-use and splash damage plants are still your best choices to kill them, along with two plants with forward projectiles and two lobbed-shot plants in the same lane. Two Red Stingers and two A.K.E.E.s can kill them. Laser Bean combined with Lightning Reed are a helpful combo in countering these two zombies at the same time. Splash damage of Melon-pult or Winter Melon can help both to harm zombies. Additionally, plants with projectiles that can pass through shields, like the Laser Bean or the Bloomerang, are very helpful. 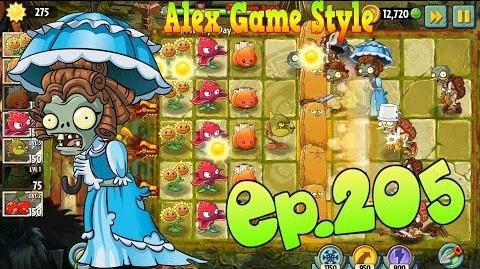 Retrieved from "https://plantsvszombies.fandom.com/wiki/Parasol_Zombie?oldid=2248376"
Community content is available under CC-BY-SA unless otherwise noted.