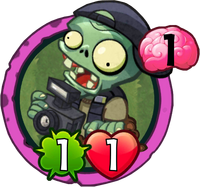 when you play a Trick.
Why is everyone always screaming and running away in his photos?
Paparazzi Zombie is a basic common zombie card in Plants vs. Zombies Heroes and a member of the

He is based on paparazzi, independent photographers who take pictures of athletes, entertainers, politicians, and celebrities, typically while going about their usual daily routines, usually illegally.

His attack refers to how dangerous a camera's flash is, despite the fact that camera's flash could blind any living things in sight for a temporary time.

Why is everyone always screaming and running away in his photos?

Paparazzi Zombie can be used as a turn 1~2 play due to his low cost. However, he can be easily destroyed because of his weak base stats, so it is recommended to hold him for a few more turns, where you should have enough brains to play Paparazzi Zombie and boost him with tricks immediately after. Cheap tricks like Bungee Plumber and Lurch for Lunch are recommended as they can be spammed without costing too many brains. In addition, playing a superpower during the Fight! phase can boost Paparazzi Zombie before he attacks. A good strategy is playing Smoke Bomb or Carried Away on Paparazzi Zombie to not only boost him, but also put him in a good position to strike at the wanted target. However, this strategy is only usable as Super Brainz or Huge-Gigantacus.

If your opponent gets Paparazzi Zombie on the field and saves their brains, try to destroy him quickly, as they will most likely play a bunch of tricks to boost this zombie. Fortunately, you get the upper hand as you play your cards after your opponent plays him, but beware of boosting and instant-kill tricks that can ruin your strategy. If Paparazzi Zombie's stats get too high, you can either play an instant-kill card or Bounce him; although your opponent can replay him if you choose the latter, you can still waste all the tricks played to boost him. Using Black-Eyed Pea and Sportacus can punish your opponent for playing tricks, while Forget-Me-Nuts, Brainana, and Dark Matter Dragonfruit can make it harder, or even impossible for your opponent to play them.