Always the dedicated man of science, the Paleontologist has been digging a hole in the same spot for most of his life. He somehow dug his way through the Earth's core and ended up on the other side of the planet. Scratching his head in confusion, he found a dinosaur museum across the street and decided to borrow some bones.

His primary weapon is the Dino Blaster. It deals 5 impact damage and 10 splash damage at all ranges. At point blank range, his weapon deals 25 spread damage.

A more spacious dino tail allows the Paleontologist to hold more shots in every clip.

With his fire damage and extra ammo, along with a slightly faster fire rate, the Paleontologist has a rather lethal long range weapon against plants. He is actually best used as a sniper if the user is accurate enough. When attacking, stay back, and light enemies on fire from afar as your allies advance. The fire damage can cause quite a noticeable dent in the health bar of any plant and if you keep igniting them, the fire will quickly erode away their health and even vanquish them. The fire can be used to put pressure on Sunflowers, if there are any, since they may end up with more injured plants than what they can heal. This is a good tactic as you can severely hamper the Sunflower's healing power.

The Paleontologist is dangerous at most ranges because of his above-average range and the fact that any plants hit by his primary weapon are ignited. He has one of the highest damage potentials of all Scientist characters and has a better chance against multiple plants due to his fast firing and a rather large clip. Staying out of sight and attacking as a group is the best way to deal with this foe. Another method could be to use the Chomper to Burrow up close to him and eat him or bite him to death. The Chomper has high health, meaning he can tank the fire damage for quite a while and deals enough damage to kill the Paleontologist in just four hits (if he is receiving healing, you may have to squeeze in a fifth or rarely a sixth hit). 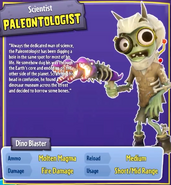 Paleontologist in-game
Add a photo to this gallery 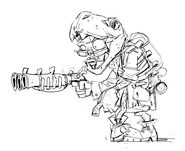 Concept art from The Art of Plants vs. Zombies
Add a photo to this gallery

Retrieved from "https://plantsvszombies.fandom.com/wiki/Paleontologist?oldid=2364009"
Community content is available under CC-BY-SA unless otherwise noted.