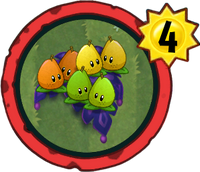 When you play a Plant here, make a copy of that Plant with Team-Up here.
Peter Piper's Planet precociously picked a pair of pickled peppered pairs.

Pair Pearadise is a galactic super-rare plant environment card in Plants vs. Zombies Heroes and a member of the

to play, and its ability makes a copy of a plant with the Team-Up trait in front of it when that plant is played, unless that space is already occupied by another Team-Up plant. Any copies of plants stay in their position even after Pear Pearadise is overridden by another environment.

Its name is a combination of "pair," referring to its appearance and ability, and "pearadise," a portmanteau of "pear" and "paradise," referring to the pears in the environment. It may also reference Pair of Pears.

Its description is a play on Peter Piper, an English-language nursery rhymer.

This environment has a potentially devastating effect. Cards such as Poison Ivy effectively double the stats received for the same sun cost. Notable power plays may include Power Flower, Threepeater, and Grapes of Wrath for stats alone. Making a plant also activates its ability, making plants with "When played" abilities like Sour Grapes and Sage Sage twice as effective. In fact, Pair Pearadise is superior to Rescue Radish (Bouncing and then replaying the plant) in terms of ability activation for plants with greater stats (or a trait) than Rescue Radish, as using Pair Pearadise results in two of the same plant instead of only one. Another option is to play any received Astrocado Pits on this environment as it will allow one to gain multiple Astrocados for a very cheap price.

Another potential combo would be using this in tandem with plants whose ability activates upon playing a plant, or whose ability becomes stronger the more plants there are on the field. For the former, there are Muscle Sprout, Astro-Shroom, and Go-Nuts, and for the latter, Tough Beets, Super-Phat Beets, and Mushroom Ringleader.

Most legendary cards are a good pick for Pair Pearadise since they have powerful abilities that stack. Some notable mentions are Kernel Corn, which will do 8 damage to every zombie, effectively destroying almost all of a horde, excluding gravestones. Alternatively, Molekale will transform every other plant twice, and the Molekale played on Pair Pearadise once. Dandy Lion King can drop your opponent's health to 1/4, as long as they don't get a Super-Block. Dark Matter Dragonfruit will increase the cost of all tricks by 12, basically preventing your opponent from playing any tricks unless they stall into the real later rounds. Soul Patch will protect you from more than 20 damage, and will likely win the game for you if your opponent lacks

Deadly, Bouncing, or instant-kill cards. Playing Astro Vera in this environment will heal you for 20 and doubles your max health. And finally, playing Apotatosaurus there results in two plants with massive stats that are also immune to tricks; unless your opponent overrides their lane with Laser Base Alpha, total destruction is guaranteed (13 damage total).

However, there are a few things you should avoid when using this environment. First, avoid using Shroom for Two, Pair of Pears, and Veloci-Radish Hunter, who already make a similar copy in the same lane even without Pair Pearadise, making the environment useless, or plants who can only support other plants like Torchwood and Wall-Nut, as making two of them will do nothing but stall your opponent. You also do not want to play plants in Mushroom Grotto if Pair Pearadise is on the field as well as there is a chance for a Puff-Shroom to appear in Pair Pearadise, wasting your chance to play a more powerful plant there. Also, while Pair Pearadise does make copies of plants with Evolution abilities like Gloom-Shroom, the new copy of that plant won't activate its Evolution ability.

Because this environment is expensive, you can conserve enough brains to play another environment to override it. But if you do not have the chance, this environment can turn out to be dangerous for the zombie hero as the plant hero can play an expensive plant in Pair Pearadise, creating an extra copy of that plant on that lane. It is advisable to bring multiple environments or instant-kill cards to take care of the environment's ability. Using cheap environments such as Graveyard is the most effective way of shutting it down.

The best way to destroy the copies is Supernova Gargantuar as when a Gargantuar destroys a plant, it can destroy all other copies of that plant, thus making this environment useless for the stats, but again, be aware of plants with "When played" or "When destroyed" abilities.

Cards that move plants, such as Sumo Wrestler and Terrify, may also prove to be an effective counter. As plants moved onto Pair Pearadise do not activate the environment's ability, moving a weak plant onto Pair Pearadise will prevent stronger plants from being played on it, effectively rendering the environment useless. The only problem with this strategy, however, are Evolution plants, as they can easily be play over the moved plant, thus activating their Evolution ability, as well as making a non-Evolved copy on the same lane.

A temporary answer to this environment is Excavator Zombie, as he can Bounce both the environment and the plants made on it, although this is not a good strategy in the long run.

If there are no other options, Biodome Botanist can be used to clog the environment with weaker plants, preventing more expensive ones from being played there. 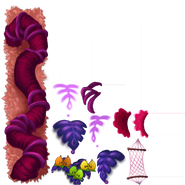 Two Primal Sunflowers in Pair Pearadise due to its ability
Add a photo to this gallery
Retrieved from "https://plantsvszombies.fandom.com/wiki/Pair_Pearadise?oldid=2249470"
Community content is available under CC-BY-SA unless otherwise noted.