His extended-range crossbow splats Plants at a distance!

What makes the Painter so special is that his weapon exaggerates the use of crowd control. The Painter's arsenal consists of a Paint Crossbow. The Cactus and her variants have a similar weapon, as they both are designed for long-range combat. The Painter creates a next-level generation of rivalry between the Cactus and the Engineer. Despite his weapon acting as a sniper, it has a small bullet drop, making aiming a little harder at long ranges.

The Painter's primary weapon is the Paint Crossbow. The facts below apply to a fully upgraded weapon.

The Painter is arguably the best Engineer variant for those who like to snipe plants from afar instead of exclusively going for the teleporter. The Painter's high projectile damage (which is 45 by default and 48 when upgraded) makes him quite lethal in the hands of an accurate player. The Painter is also a good counter to the Cactus because the Painter has a variety of perks that the Cactus does not have; first of all, the Painter deals more damage per hit than any Cactus (barring on headshots from the Camo Cactus), deals splash damage (meaning misses can still deal damage), and finally, the Jackhammer gives the Painter an agility advantage in close quarters in addition to allowing the Painter to "tackle" plants by running into them. On top of that, he provides some degree of safety against Cacti as the increased movement speed makes the Painter hard to hit. However, the Painter's shots will not always land where the reticle shows they will land. The Painter has more difficulty trying to hit plants at longer ranges due to its clunky aim and slower projectiles.

Despite the mentioned advantages, you should avoid close-range combat as the Painter since his slow firing speed makes hitting targets up close exceedingly tricky unless you manage to stun them with either the Sonic Grenade or the Proximity Sonic Mine. 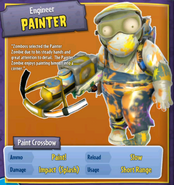 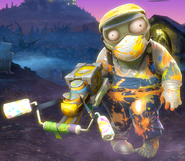 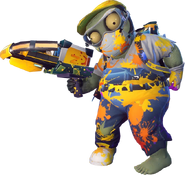 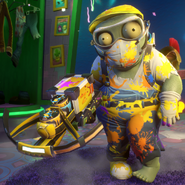