Plants vs. Zombies Wiki
Register
Don't have an account?
Sign In
Advertisement
in: China exclusive, Archived, Plants,
and 12 more
English

For the version in Plants vs. Zombies: Journey to the West, see Oxygen Algae.

Beating East Sea Dragon Palace - Level 1-1
Supplies oxygen to surrounding area, allowing land plants to be planted, range of oxygenated area will increase as it is leveled up.
Oxygen Algae (氧气藻; pinyin: yǎngqì zǎo) was a plant and an environment modifier in Plants vs. Zombies Online. It was an aquatic plant, and as such can only be planted underwater.

Since most plants cannot be planted underwater, the Oxygen Algae must be used. When planted, the player will be able to plant any other plant in a cross-shaped area but can also upgrade the oxygen range by spending sun on it.

Oxygen Algae was the first plant obtained in the East Sea Dragon Palace. It released oxygen in a cross shape around it to let land plants survive in an aquatic environment. If eaten the surrounding plants would slowly take damage until either defeated or until another Oxygen Algae is planted in a nearby vicinity.

It also had a meter below it with 3 sections, which was used to show the level of Oxygen Algae. The player could click on the Oxygen Algae to level it up by spending some sun.

Oxygen Algae is based on the plant of the same name from Plants vs. Zombies: Journey to the West, who in turn was based on kelp, large brown algae seaweeds that make up the order Laminariales.

Its appearance could additionally be based on the bubble algae (Valonia ventricosa), a species of green algae found in many oceans throughout the world in tropical and subtropical regions and is one of the largest unicellular organisms on earth.

Its Plant Food ability was to heal all plants around it to their maximum health. 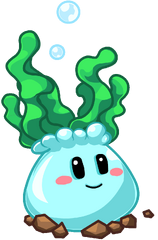 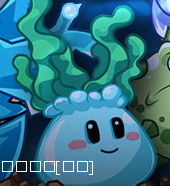