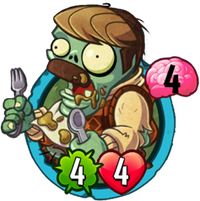 This heals to full and gets +2

when it destroys a plant.
His cholesterol level is off the charts, and yet he seems to be in remarkably good Health.
Overstuffed Zombie is an event zombie card in Plants vs. Zombies Heroes and a member of the

. He does not have any traits, and his ability heals him to full health and gives him +2

every time he destroys a plant unless he is destroyed in combat against one.

His description refers to the fact that despite appearing to be overweight and unhealthy, his ability allows him to heal himself to full and get more health.

His cholesterol level is off the charts, and yet he seems to be in remarkably good Health.

Frenzy trait either. However, he has the ability to heal himself to full and get +2

. This means that he does not need healing from Medic, but more importantly, his ability makes him an outstanding tank that keeps you in control of a single lane, as long as he stays on the field. This zombie is also excellent against plant heroes who lack destroying tricks such as Captain Combustible, as they will have a greater challenge at destroying this zombie if his ability is effective enough to give him enough health.

You can play strength-boosting cards like Vitamin Z and Orchestra Conductor, which makes him hit even harder so he can destroy plants more easily. You can also play tricks that give him

Frenzy, which works well with a strength boost. You can also give him both by playing Maniacal Laugh, making him nearly unstoppable. If you are playing as The Smash, you can also choose to play Possessed to give him extra survivability, as well as the

A good zombie to pair him with is Biodome Botanist, as he can make a weak 1

plant on Overstuffed Zombie's lane, which he can easily destroy to get more health.

If your opponent has played Pecanolith, then you can use this zombie to your advantage, since every time he destroys a plant, he will be able to do more damage.

If you are playing as Brain Freeze, then you can pair this zombie with Barrel of Barrels or Laser Base Alpha so he is guaranteed to get more health every time he attacks a plant, provided he is not destroyed.

When this zombie is on the field, do not play any plants with less than 4 health, as it can make Overstuffed Zombie even bulkier by letting him destroy them, unless that plant has enough strength (4, precisely) to destroy Overstuffed Zombie in one attack, such as Split Pea.

If all else fails, you must destroy this zombie quickly, or else he becomes too tanky for you to deal with. Resort to instant-kill cards like Squash and Lawnmower. If those are not an option, you can soften him up, or destroy him with damaging tricks like Berry Blast or Sizzle. Alternatively, you can play cards such as Steel Magnolia or Root Wall on a plant in front of him to make it harder for him to destroy it, but be careful if Overstuffed Zombie gets a strength boost. As Citron, you can also play Peel Shield to stall a turn.

If you see this zombie on the field, do not play Pecanolith, as he will be able to do a lot of damage on you very easily, especially if he has the