Outhouse Zombie is a Spawnable Zombie, which appears in Plants vs. Zombies: Garden Warfare, Plants vs. Zombies: Garden Warfare 2 and Plants vs. Zombies: Battle for Neighborville. It uses an outhouse to shield itself. It can be found only in the Gardens & Graveyards, Garden Ops, and Taco Bandits modes. Like all Spawnable Zombies, it can only be obtained from Sticker Packs. If it gets close to a plant, it will headbutt it. Rarely, if the player goes too far from it, it will wield a laser gun and shoot at the player dealing light damage. However, they are extremely weak to Spikeweed, Spiky Spikeweed, and Chesterweed, since they can break the armor in one shot. Its melee attack is the Headbutt Slam (Zombie Hurt when outhouse is destroyed, in Garden Warfare 2) and its ranged attack is the Shoddy Laser Blast.

In Garden Warfare 2, the zombie wears a bucket on its head, and the Headbutt Slam attack is renamed to Zombie Hurt. This is also shared with Coffin Zombie.

Uses an outhouse to shield him from attacks and has other unmentionable benefits too!

The Outhouse has 450 health, and can survive multiple hits from Chili Bean Bombs. The Zombie inside has about 250 health if damaged while inside the outhouse. Upon losing its outhouse, the zombie has 170 health.

The Outhouse zombie's high heath means it can take fire from lots of plants and still keep going. This makes it useful for taking Gardens or for extending overtime. It is also very effective in groups, and the distraction can allow other zombies to move in. However, its slow speed means it will take a long time to make it to the Garden, so summon it close to the point. 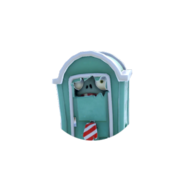 Retrieved from "https://plantsvszombies.fandom.com/wiki/Outhouse_Zombie?oldid=2277924"
Community content is available under CC-BY-SA unless otherwise noted.