Orchid Chef was once the number one plant in the kitchen, whose soup was extremely delicious, until he stumbled upon a new cookbook "The Essence of Offal Cooking", which he now treats as gospel. And recently his cuisine began to produce some unexpected results.

Orchid Chef (厨师杓兰; pinyin: chúshī sháolán) is a plant in Chinese version of Plants vs. Zombies 2 introduced in the 2.6.0. update as an unlockable plant for the Heian Age world.

Orchid Chef attacks by lobbing soup at zombies, damaging them and making them smell bad. Zombies one tile behind smelly zombies will be driven away by the odor, smelly zombies' odor will dissipate after 3 seconds.

If attacked continuously, smelly zombies will no longer drive away other zombies. Instead, they will not be drawn to sushi, but will still be affected by it.

Orchid Chef is based on the slipper orchid, orchids in the genus Cypripedium that are widespread across the northern hemisphere. His appearance most likely based off of the yellow lady's slipper (Cypripedium calceolus).

His chef-like appearance and ability to throw soup is a play on the Chinese name for the slipper orchid, which translates literally to "ladle orchid".

When given Plant Food, Orchid Chef will target the 5 closest zombies and throw 5 large balls of soup at them, these large globs of soup will damage and odorize in a 3x3 area.

Orchid Chef is a good plant to defend yourself against stronger zombies. You must plant two or three of him in two or three lanes. Occupy a few of the lanes with a single Orchid Chef, while other lanes that don't have any Orchid Chefs planted on them can be set as a trap for the zombies. Planting Celery Stalkers on each unoccupied lane might be a good defense to defeat any zombies diverting to other lanes.

When it comes to Sushi Chef Zombie, sometimes you must be careful since he can throw sushi on random unoccupied tiles, even on a lane between two Orchid Chefs planted on two lanes after it. Unless you plant ice-based plants like Snow Pea on unoccupied lanes between Orchid Chefs, if there's sushi in front of it, he will slow the zombies down if they're in-front of the sushi.

Chicken Wrangler Zombies and Weasel Hoarders are the only zombie that the player has to be aware of, since they are able to unleash a swarm of Zombie Chickens and Ice Weasels down through three lanes at once. Also, Jester Zombie is another zombie that the player must be aware of, since he able to deflect his projectile back to the plants. To defend yourself from Chicken Wrangler and Weasel Hoarder, try to use Lightning Reed to kill their pets quickly. For Jester Zombie, try to wait any kind of zombies that bypass him as a backup, and then fire up on that backup zombie. After that, try to plant Fume-shrooms on unoccupied lanes to trick the Jester Zombies. 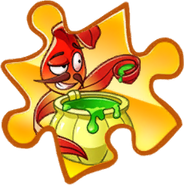 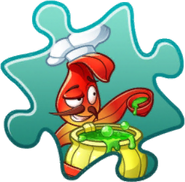 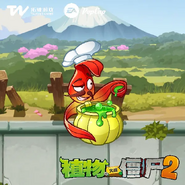 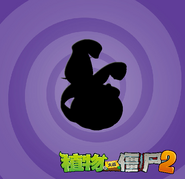 Orchid Chef on a News Banner