Waving his fan, and the wind of luckiness shall blow!

His kariginu doesn't seem to be that protective...?

Heian Age - Day 17
He waved his fan, and the wind at the shrine blew.

Memory Lane
Unlike the other zombie fans of zombies' fans, Elite Onmyoji Zombie believes that as a zombie, one should have a greater ambition.
Onmyoji Zombie (阴阳师僵尸; pinyin: yīnyáng shī jiāngshī) is the fourth and final unique zombie encountered in Heian Age in the Chinese version of Plants vs. Zombies 2. He can summon Divine Winds.

After walking two steps on the field, Onmyoji Zombie then will raise his fan and swing it around. It will cause a Small Wind at first, which push most zombies forward, and then a Big Wind later on. Similar to Divine Wind, they function the same way as it is, but unlike the aforementioned mechanic, Small Winds only happen once instead of twice in a row.

He has an Elite variant that can summon Small Winds that push zombies further than usual.

Onmyoji Zombie is based on an Onmyōji, one of the positions in the Ministry of the Center's Bureau of Onmyō under the ritsuryō system in ancient Japan.

Onmyoji Zombie, as his name suggests, wears an onmyōji outfit (his top hat was grey-ish dark brown, while his outfit are mainly cyan and white). He also has a fan, which can be used to control the Divine Wind mechanic.

You have to prepare Windbreak Dendrobium to counter his main ability. If there is a Divine Wind mechanic that goes after him automatically without using his ability, then it's also a problem for your defenses as well. Try to block it with planting two plants that distracting them such as Puff-shroom or use Windbreak Dendrobium for their main counter since he can stand longer with two leaves. Planting more Windbreak Dendrobiums in diagonal lanes will be a perfect strategy for upcoming winds that goes through other lanes. 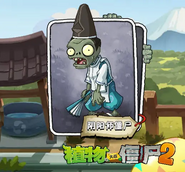 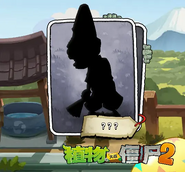 Part of the trailer with Onmyoji Zombie's silhouette (animated) 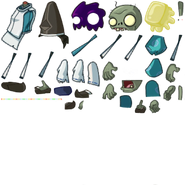